Notes on another script 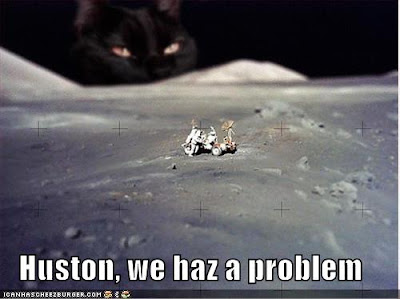 Cat cafe. You go there to pet cats. Of course. Bring tuna.

AfterEffects has been flakey lately. Tried rendering where AE would suddenly shut off a layer in the render, even though I could see the layer on screen. Had to render out 150 frames with "save frame as" by hand and then re-import as a Photoshop frame sequence to then export as a Quicktime. It was a load of fun.

Today I found that adding motion blur knocked out a lens flare effect. No. Idea. Why.

Maduka's in Geneva for the next couple weeks. I think I talked him out of over-working himself before he went but still the only major sequences in Clonehunter which haven't been edited yet are the hoverbike chase and the fight at the end -- so he's certainly put in a lot of time on this edit. Whew!

The following are notes on a script. Don't bother reading them, they won't make sense unless you've read the script:

The debate: I think Luke is so freaked out by Genocide that he doesn't want to get in a position where he can be pushed again. Genocide is a pusher.
We get to Scaramanga's too quickly. We get to the "not on the payroll" idea too quickly.
Luke goes from "do stuff the right way" at the beginning to "I'm gonna break your fingers anyway" in the 2nd act. Is that a natural progression for him? Zeke implies that Luke had gotten soft -- if so that's two character changes. Is there a moment when Luke decides to kick a lot of ass? Is it when he sees Zeke's wife?
He should be afraid of Genocide... unless... they put a chip in his brain to make him resistant to Genocide's pushing. Maybe they make Luke cybernetic so he's one step closer to being an android himself? That would be the debate and we'd lead into act II being his arrival on the planet. Of course, the stakes have to amp up in order to get us into act III -- like if Genocide were setting up an android army to invade Earth.
at 7/22/2009 11:38:00 AM

Email ThisBlogThis!Share to TwitterShare to FacebookShare to Pinterest
Labels: 0904, 0905

Would love to read the script.

Not until we fix these problems you wouldn't! ;-)