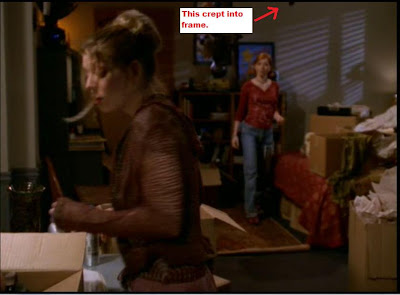 So as soon as I say that they don't use cell phones on Buffy, out comes a cell phone.
*************
More Buffy stuffy: It's nice to see someone with a big budget make the kinds of mistakes which we tend not to make. We would have painted this boom mic out (I think this was a static shot so it's fairly easy to do.) It may have been that the boom went unseen on the broadcast version because it was beyond where most TV's have image. Still, it amuses me.

Remember back in the olden days when mics would creep into frame in movies in the theater? I think that's because movie theaters were much worse about having correctly calibrated projectors and they showed you more frame than they were supposed to.
at 9/22/2009 09:30:00 PM

I suspect that there's a chance that in the transfer to DVD there's a little of the frame that wasn't broadcast safe getting shown here as well. I rewatched the whole series a while back and there are a few boom shots that dip into view. What I find more distracting is recycled background players. I forget the exact episode in one of the early seasons where Buffy and Xander have a long expository discussion at school. They're standing near the outdoor stairs and a girl in a rather loud outfit crosses left to right. Then she crosses from left to right again but veers up the stairs. Then in deep background she crosses right to left lol I remember watching it in slo-mo and I think it was about six or seven crosses.

That would be okay but she was in very bright colours and making impossible jumps with each over the shoulder and master cut. That's the fault of the AD but at the same time, they need to populate a scene and the budget allows for only so many BG. I've done tons of background and always made an effort to be on top of the logic and pacing of a scene. All in all though, for a show as complex as Buffy, they did a great job of continuity. In the course of seven seasons there are some slips but not an inordinate number.

I think working on a smaller scale provides greater attention to detail because there aren't the layers of delegation. As with anything, the more hands on the work, the more opportunities to introduce error. You might not have the production value that a big budget can provide but there's more of a sense of something being hand crafted, personal. I'm sure that on-set continuity people are thanking their clipboard toting gods that smoking has gone out of fashion. Few things betray continuity more readily than smoking and drinking.

Yeah, smoking looks great but it's a pain in the tush. As for drinking -- we do endeavor to go for opaque mugs.

I actually find the re-use of background actors amusing. And we do have funky things happening continuity - wise but we like to think that the drama outweighs the continuity. Ha!

Either that or we pretend we're editing like they did in The Limey. ;-)

But the weird thing (to me) about that boom coming in is that I'd presume they were looking at overscanned image -- just as I am -- on a computer monitor. Oh well, sometimes you just gotta get things out the door.

you're right about that, if the performance worked and the day is running long, the money is fleeing your pocket, you have to choke on the foamy nose of a boom once in a while. and while opaque mugs are a good idea for the most part, i lose my mind when i see actors wandering about with them at severe angles, they sit down and then delicately sip as though they're brimming. but worst of all, the disposable coffee.. oh arggghhh. when an actor parks a starbucks style container on a table or desk and it produces that hollow, empty clack noise i want to throttle them. your props should not be betraying the reality they are introduced to reinforce. i've seen top quality, big name actors betray scenes with those stupid cups. okay... peeve over.