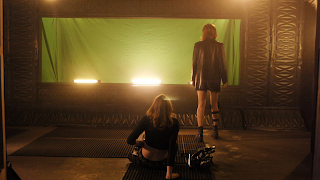 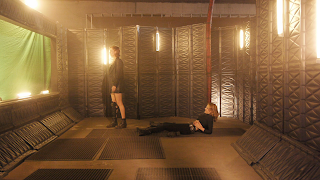 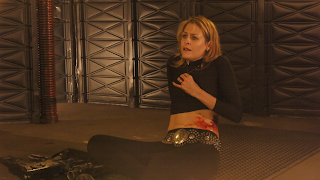 Today we had to shoot the lovely Tina Tanzer for to be the holographic dead sister of the character Raze (played by Lucy Rayner). Maduka thoughtfully sent us these reference stills (because the scene was shot in two parts with a greenscreen) and we looked at these pictures... er... after we shot the other side of the scene.

So these are the unused reference images for the scene. Tina will be "in" the greenscreen (which otherwise is an image of the earth below them). Robin Kurtz as Helen is also in this scene.
___
Oh, and in battery news the big Sony NP-F960's are both dead. One won't take a charge and one acts like it isn't charged even when the charger says it's charged. We use those on the Sound Devices 702 recorder. I don't know what the issue is. Looks like I'll have to blow a hundred bucks in replacing at least one of the batteries.
at 10/27/2010 01:55:00 PM