We have acts 1-7 on Day 2 locked. Which means I do the mix of act 1 over the next two days and then beg our distributor for a few more days to get the rendered picture out to him in California so he can re-edit the trailer.
We have this awesome shot where our gang is surrounded by giant robots. The shots look fantastic but somebody thought it would be a good idea to shoot them hand-held and let me tell you the tracking on those shots is simply... crazytime. 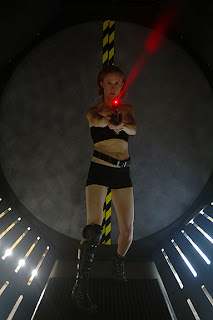 I have no idea why it's so freakin' hard to nail the tracking. Maduka has taken to going in and doing the tracking by hand. Frame-by-frame. There are a number of good long and held moments where the robots are just locked in 3D space, they totally look like they're in the practical background. And then there's a couple seconds here and there where their mattes "bounce" a bit for seemingly no reason. Nope. I got no idea how they/why they do that. But when it works it works and you just know those shots are going in the new trailer.
--
On Earthkiller it's time to animate some robots. Dinosaur-robots. Evil, evil, dinosaur-robots. They brutally murder David Ian Lee (a long-time fantasy of mine), and also take a bite out of Katie Hannigan's arm (again, a long-time fantasy). And then an unmanned shuttle crashes into the dinosaurs, Katie, and David, causing a fireball which ends up blowing a wormhole through time. It's based on a true story.
---
Our distributor wants an assembly edit of Earthkiller in what, two weeks? We don't do assembly edits. When Maduka finishes an edit it's pretty much a final edit. I make maybe a dozen tweaks every 10 minutes, the producer gives about 60 notes on a punch-list for sound and picture (which we divide into 1. "we can do this", 2. "we can do this if we have time", and 3. "this change isn't going to happen") and then we send the movie to the lab.

So I don't know what we're doing about the assembly. We'll have... something for him.
---
The brilliant director Chance Shirley stopped by the studio today. If I were half as good a director as him I'd be so full of myself I'd just be impossible to be around. Hmm... maybe I already am. In any case, his amazing movie Interplanetary comes out on the Ides of March baby! I will be the first one to order that movie on both Amazon and Best Buy.
at 10/11/2010 09:40:00 PM

Email ThisBlogThis!Share to TwitterShare to FacebookShare to Pinterest
Labels: 0801, 1002

Wow, the frame-by-frame tracking is not fun, I know.

I have had that same problem with the jitter sometimes and I think it's from messing with keyframes within keyframes.

Man, that is gonna look like garbage to anyone who has never keyframed in AE.

Ooh! That problem I know the solution to!
Flip over to "graph" mode in AE and you can see that the original curves are probably bent so far that they go into negative numbers before positive numbers. Just grab the handles and straighten them out.

Nice! I'll try it--have never looked at the graph mode there. I'm really not qualified at all to do the work in AE that I do. :)