Or: It's all Juanita's fault. 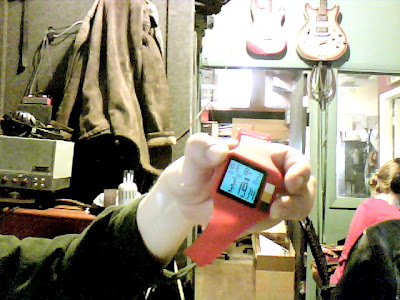 You see, she came in wearing a groovy, big, red, watch. Which was the impetus for the idea that everyone gets something red. 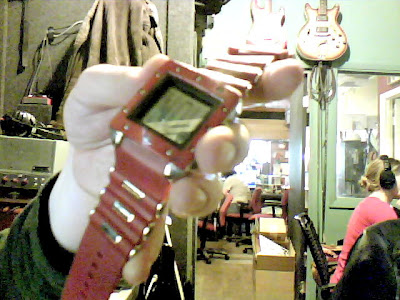 So I went to Canal Street and bought a couple watches. They were both $20 but I "talked them down" to $18 and $12 respectively. I actually said "Can't you give me a better price?" about one of the watches and the guy actually said "For you, $18." The other watch I pointed out that it was all scratched up, so he came down $8 off the asking price. Which doesn't mean I didn't get rocked for them. But I did get them. And, I believe, it means I'm at the end of the prop-buying part of my day.

Here's the Chinese symbol for "heart". This is one of the very first words one learns in Chinese, because it's relatively simple and ends up being inside other symbols for other things.

I say we shoot the closeups we need of these watches on day one of shooting because who knows how long these watches will keep working. I have zero idea about how to set either one of them.
at 4/07/2011 03:34:00 PM

Damn, Canal Street is more expensive then it use to be. But you can still find everything down there.

I'm usually pretty good at stupid things like setting watches, so if they're not set by Saturday, I'll take a crack at it

They're sort of shockingly unintuitive. It's not like we need them to show time though.
But they look nice.
Ironically, they (while they last) will keep better time than the most expensive mechanical watches in the world. I just think that's funny.

Oh, Drew. You need to see how I deal with Canal Street shopping. The key is: just hand them the bill you want them to accept for the item you're purchasing. No discussion. Take the watch, give them a $5 bill, smile, nod a 'thank you' nod, and walk away.

It would help if I were a pretty girl I think. Hmm... next time, I'm sending you shopping for me.