OK, now many years ago two friends of mine who I won't name but have the initials Daryl Boling and Ato Essandoh got into a debate about the merits of the movie Kill Bill. Either party took fairly strong positions on whether the movie was "awesome" or it "sucked" and it got me to thinking.
If two people, people whose opinion on things dramatic I trust, can disagree so fundamentally, what in the world is going on? 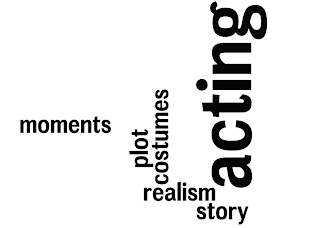 Obviously, different people respond differently to the same dramatic presentation. Even non-crazy people may feel very different about a movie or a play or a book or whatever.

Now my idea is that different people weight different factors when they decide if they like something or not. Many people are story snobs. The story must be exact. Sometimes that means that the story has to work out exactly right. Other times it means the story can knowingly twist up the story. But story is ueber alles. (This, oddly, is the trouble most screenwriters -- myself included -- seem to have.)
But other people are all over the acting. They don't even care about the story as long as the moments are right. And many others are genre addicts. They'll watch every zombie picture or space adventure they can get their hands on. 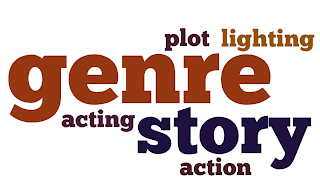 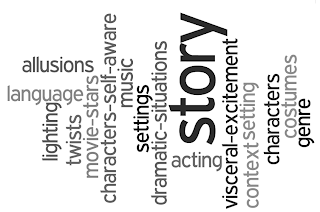 I made some visual aids to demonstrate some ideas of what I believe some people might feel, and their relative strengths. I used Wordle.

So when one sophisticated person says to another "I can't believe you liked Firefly. It sucks" we might perhaps do well to look into why they might say something suchwise.

In our particular case, a man who I will give the pseudonym David Ian Lee expressed the idea that he simply couldn't get into the Firefly series but he was aware that Nat Cassidy and I did, in fact, like it.

At first Mr. Lee dismissed us as (in essence) of having such a strong genre bias toward science fiction that we would overlook any of the other issues in the series. But I disagreed because clearly Nat and I watch many other kinds of things that do not have a sci-fi genre to protect them and we are largely too sophisticated to let a genre get in the way of our reason and judgement.

But something David said about his "not being able to get into it" reminded me of something Alex Epstein wrote on his blog about the Firefly series.

I'm convinced that FIREFLY failed not because it was a space western, but because Joss Whedon's storytelling might have been a bit too surprising for the broadcast audience. You just never knew where an episode was going to end up. And on broacast, that's not necessarily a plus.
From:
I was watching Firefly on disc. Is it just me, or do the acts sometimes just go flying off in an entirely new direction from the previous act?

That's good and I also see why that made it harder to get an audience. It's good because you really don't know what's coming. Even on Buffy you could figure out where the episode had to go. There were surprises (he killed Jenny Calendar!!!!) but the act structure was fairly normal.

That means the story is more involving. You can't complete the story in your head. You really have to pay attention.
And from the comments:
Genre plots are so ingrained that you can’t really get rid of them. It seems like Joss & Co. were fond of the bait and switch: you think you’re watching a “submarine story” (stock scifi plot) when really you’re watching an origins/love story (stock wagon train plot); you think you’re watching Mal the reluctant husband teach his young bride to be a strong woman in the frontier (stock Dr. Quinn-type) when really she’s a black widow and the whole crew has already been caught in her literal net (stock spy intrigue, but it’s not what we thought we were watching). The stakes for each genre interpretation are different, and the act breaks you mention are the moment when they pull out the rug and tell us what we’ve really been watching. It’s a good surprise, but I have had a suspicion that it only really works with people who are similarly well-versed in what to expect from genre TV.


So... I'm not saying one person is right and another is wrong. That's pretty boring actually. But I am saying that one person really liking the way the structure is changed might lose someone who thinks "everything that happens here is random".

Which, if I were a better writer, I could explain better.

are you really a screenwriter? " we might perhaps do well to look into why they might say something suchwise."? you should go back to school dude

Are you seriously claiming that Firefly failed because it was too good and original? Joss Whedon fanboys say the darndest things.

Firefly was just another tired genre mashup with obnoxious and unrealistic characters. Like most of Whedon's crap.

Are you seriously on my blog talking about things from over a year ago? Do be quiet.
I thought I'd shut off anonymous comments...

I'm a big Scifi fan. It is by far my favorite genre. I recently entered the 4th episode of Star Trek: Enterprise and I love it. The 2000s Battlestar Galactica was my second favorite series behind Star Trek TNG. That being said, FireFly is not fun to watch. Everything said on this article is meaningless because the show just is not fun to watch. The stories are boring, the characters are bland, the lighting and scenery is drab, the dialogue is not humanlike, the villains are inconsistent and dull. I have watch half of the episodes, and I finally had to give up on it. It is simply not very good. No offense, it just isn't fun to watch.

See? You react to the show differently! You feel the show isn't fun to watch! Many people do (I do).
That's a very different reaction. ;-)