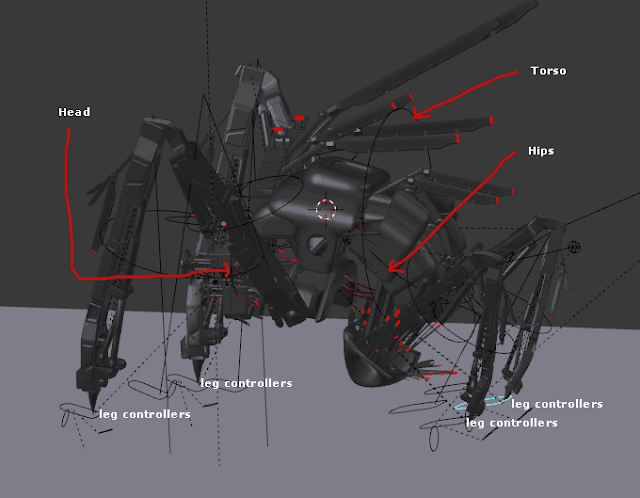 Via Ian, and from here, is a great explanation of the difference between IK and FK in 3D models.

John.d.h:
In Blender's armature system, there are two main types of kinematics, or ways motion is calculated.  These are forward kinematics, and inverse kinematics, or FK and IK for short.  FK is the default, where you move one bone and all its children move with it.  For example, you shrug your shoulder and the rest of your arm shrugs up with it.  IK is the opposite, where the child bone "leads" the chain of its parents.  For example, you throw a punch and the rest of your arm and your shoulder naturally follow your fist.  The two ways I know of using IK are 1.) put an IK solver on a bone (this is how a lot of lower body rigs work) and 2.) use Blender's Auto-IK switch.  The Auto-IK switch is much more convenient when you will be going back and forth between FK and IK.  One approach I've learned is to use IK for the general shape of the motion you want, and then FK for manipulating the details.  The convenience of IK comes in the fact that you need only manipulate the leading bone to get the motion you want, instead of rotating each of its parents first.  Returning to the punch example, using IK you could simply grab the hand bone of your armature and move it forward to the target, and the rest of the arm and the shoulder would naturally follow.  To fine-tune your rig for easier IK, you may have to break some connections if you don't want the whole body to follow a single bone.

Email ThisBlogThis!Share to TwitterShare to FacebookShare to Pinterest
Labels: CG