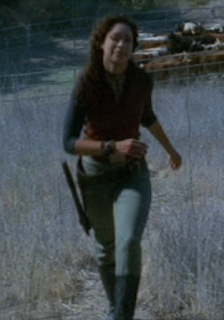 So last night during our photosession, the idea that Foxwell carries a mini-shotgun on her hip came up. Today I was doing some research on that -- a long-ish gun on a thigh-holster is a tad might impractical. But Zoe on Firefly has one, so I figure the problem has already been solved if we only knew how they did it. I screen-grabbed a couple pictures of Zoe from Firefly and wondered "How does that rig work?" Then I had an epiphany: "I bet some ueber dorkmeister has already worked out how that holster works." And I was right.
Apparently the whole rig is based on Steve McQueen's Mare's Leg holster from his TV series. But it seems to me that Zoe's is more suitable to quick draw.
I feel that I like Foxwell without the extra lines that a hip holster will create on her. So the whole issue might be moot. But I thought it was worth looking into.
at 4/06/2011 06:59:00 PM

Didn't McQueen's spin so that he didn't even have to draw to kill the bad guy?

You could throw in a line about her being a history buff (assuming this is the future and not a diff planet) and finding a relic of Josh Randall's.

Nice post and very valuable information for all. We have the best concealed carry holsters on the planet! (IWB) In waistband, ankle and pocket holsters. Thigh holster