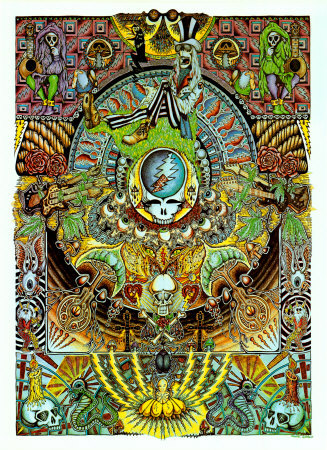 So to actually talk about Jerry as a guitar player is typically to either to be wrapped up in idol worship, or to be dismissed as an unrealistic hippy.
But the fact is, Jerry was a pretty good guitar player. And he had a very interesting sound. According to this article he played a number of guitars before settling on a couple custom instruments.
Unusual for a "rock" player, much of his sound is clean. Rather than soaring (or technically complicated) leads, he's known for flat-picked melodies on guitar.
Now, for the love of all that's holy, he wasn't a singer. But that melodic clear sound of his guitar is pretty fascinating.
at 4/12/2011 01:58:00 PM