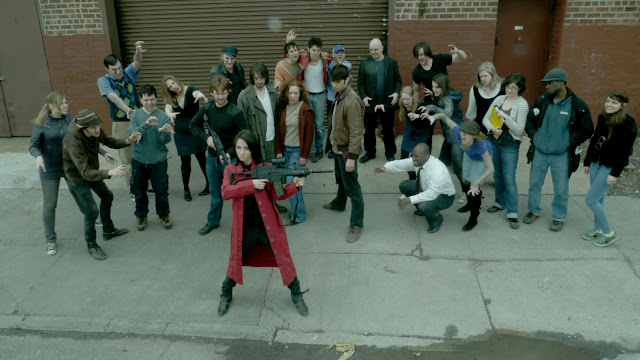 Here are the pitches Tom Rowen and I came up with. Don't make me show you a picture of Tom's butt to prove it!

36 Hours
Calvin Jones, an ex-marine and bodyguard must team up with a Russian coked-up stripper in order to find his ex-wife's daughter.

Tamara Medved, beautiful bleached blonde junkie, is the only witness who knows where the Russian mobsters have the girl. But Calvin only has 36 hours to get her straight and to get the bad guys before they kill the kid.

An ex-drug-dealing bartender is forced to do one last score to pay of his bar's debt to a loan shark.
Blood on the Streets
A newly-released ex-con is forced to rob an armored car to pay off his coke-addicted brother's gambling debt.
Keyton Daynes or "Y.Y." spent 15 years in the joint practicing Kung Fu and jujitsu. But when he gets out he gets dragged back into the life by two scumbag coke dealers to rob an armored car.
What he doesn't know is the armored car is carrying Chinese Triad mob money.
Now he has the Chinese mob, the FBI, and the drug dealers after him. And if he doesn't get his brother and his grandmother on a plane out of the country there's gonna be blood on the streets.
Bullets in El Barrio
Two brothers growing up in Spanish Harlem. One, Montserrat Mendez, becomes a DEA agent. The other, Tomas Mendez, pushes dope on the streets they grew up on.
Now Montserrat put on a task force to take down his brother's crew. At the same time, both brothers are in love with the same girl -- Juanita Arias.
All hell breaks out when the Russian mob decides to make a move to take control of Spanish Harlem.
Now both brothers have to fight the Russian mob -- and one another -- for love and their lives.
The Polo Grounds
Mac returns from the Iraq War with his best friend Banks. But they have no jobs and no future.
Pushed into a corner, Mac starts dealing drugs and then starts to murder his way to the top and rules with an iron fist over the Projects.
His beautiful girlfriend, Layla, helps him murder the local drug kingpin. And then convinces Mac to kill Banks.
Mac thinks he's invincible. No bullets can stop him. No knife can cut him. He runs a reign of terror over the Projects.
But eventually the community rises up. Layla commits suicide and Mac is machine-gunned by the son of one of the men he killed.
at 10/28/2011 11:16:00 PM

These pitches are fantastic.

These are good, but I think the last three aren't quite Schnider approved; they need to be tighten a bit.

Look. I was drunk!
You should send them your own pitches! ;-)
Hee!