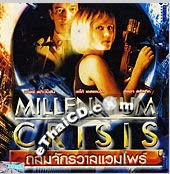 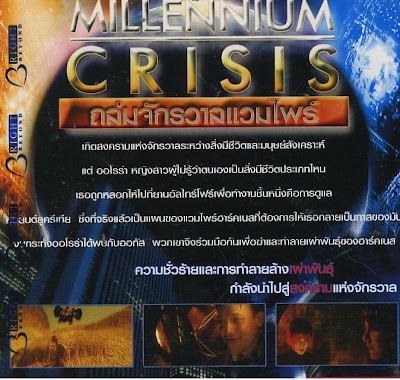 Our first look at the Thai version of Millennium Crisis. I would have expected to see more on what I believe to be the distributor's site, but I can't find anything.

We got a review in German. It's not such a bad review, actually. They try to be kind at least!

The movie hasn't come out in Germany yet. It's supposed to... sometime. In any case, this seems to be a review of the American version.

It's interesting when we see blurbs about the movie on sites. This site has this little thing:

Eons after a violent race of aliens known as the Kluduthu caused an intergalactic war, they begin seeking out the descendant of a chameleonic humanoid to help them destroy the universe. But when a young woman realizes that the extraterrestrial warlords are looking for her, she must prevent them from using her in their diabolical plans. Clare Stevenson, Olja Hrustic, Ted Raimi star. 86 min. Soundtrack: English.

I know we didn't write that! Believe you me -- I would have wanted to write "chameleonic" but if I had I'd have been suppressed (that is, stuffed in a sack and sat upon).

Did I post this review from Bum's Corner? "The sets are minimal--some are even, well, subliminal--"

I'm still laughing at that...

Deadpit Horror Reviews has a little review. Oddly, they criticize the plot by saying it isn't complicated. Which pretty well is the opposite of what all the other reviews say.

Email ThisBlogThis!Share to TwitterShare to FacebookShare to Pinterest
Labels: Millennium Crisis (was Bloodmask)