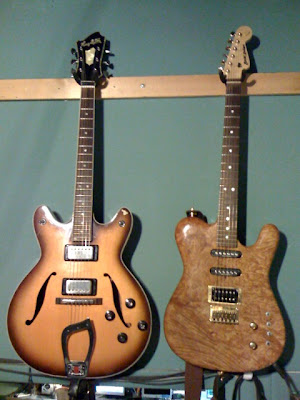 So. I have these two electric guitars (first picture, side-by side hanging on the wall).

The one on the left is my Hagstrom which I got when I was... fifteen? My parents bought it for me for Christmas when I was a sophomore in high school.

The one on the right is a custom-made guitar. Barry Sandor, a dentist in New Jersey made it for me and it was a great price. As you can tell it's quite something as far as the crafting of the body goes. But for some reason I've never been in love with that guitar. I think now I know why: the neck (which is the part of the guitar Barry bought rather than made himself.)

Lately I've been looking at Gibson Les Paul guitars. I played this gold-top Gibson Custom Shop 2004 Les Paul '57 reissue (yes, that's a mouthful) at Matt Umanov Guitars. (This is one of the better set-up shops in the city -- they told me the last time I came in for a set-up that they weren't taking any more customers. Feh!)

I played a number of Les Paul clones, by Paul Reed Smith and others, but the reissue Gibson simply felt better than the others. It seems to me it's mostly because it has a vastly thicker neck. For me, that's just much more comfortable.

Now, as much as I hate to say it, the look of that '57 guitar (which was on sale, used, for $2500) doesn't appeal to me so much. But it felt nice. I didn't even listen to any of these guitars through amps. But did I mention the '57 felt very very nice?

(The last guitar picture is a '59 reissue. It's very pretty.)

Both of these are solvable problems -- even with off-the-shelf "'59 roundback 23 3/4 - inch conversion necks" apparently. It seems that Warmoth and Musikraft both have those kinds of necks.

If you want a guitar with Gibson-style headstock, I recommend the Epiphone Casino. $500, full hollow body, just like the Beatles used to play. Fun, fun guitars.

Solid body is what I'm going for. I'm about to lay out for a new Warmouth neck. We'll see how that goes... But yeah, I've heard good things about those Epiphones...