You Have to Survive "So What"?

When you're making an argument, one of the first things you need to do is apply "so what?" to the argument. This bozo attempts to argue that because the perpetrators of the 9/11 attack were Muslim, the deaths of those who were killed by them, and who were also Muslim, is somehow irrelevant. Actually you'll notice that he doesn't actually go ahead and draw the conclusion, because doing so would be absurd. So he just puts forward the first part of the argument, without running it through the "so what?" filter.

Another thing you need to do is run your argument through the "does this argument work without hyperbole" test. He has a picture on his site showing an aerial view of the ground zero site still smoking (presumably taken on 9/11 or 9/12) with the caption "Clearing off the future mosque building site". Except that the site of the "mosque" isn't in the picture because it's not close enough to be in the aerial photograph.

Here's a picture of the actual proposed site and ground zero. Does the argument work without hyperbole? Not so much. 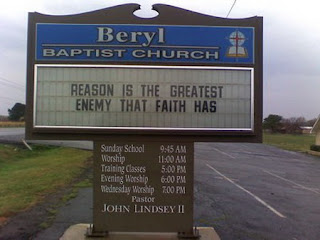 As the "Bozo" in question, I have to ask you to read the post again. I never said anyone, muslim or otherwise was "irrelevant", only that the identity and religion of each highjacker was well known. And, I'm not about to be upset over plans of some yahoo in Florida to burn the muslim's koran, because it's no more of an issue to me than if someone was to burn a bible or any other book of parables. The true danger to all of us on this big blue marble of ours is that so many people feel a need to define themselves as a "fundamentalist" member of some religion, especially those who think their invisible god is stronger than any other invisible god.
Amen!
Jerry w.
www.boskolives.wordpress.com

P.S., my congratulations to the Beryl baptist church for putting up one great motto, I could not agree more with them.


"This bozo attempts to argue that because the perpetrators of the 9/11 attack were Muslim, the deaths of those who were killed by them, and who were also Muslim, is somehow irrelevant."

Yes, the identity of the hijackers is well-known and to that I say "so what?"