There are 1.4 million band profiles on myspace.com.

And I ever wondered why I couldn't get a record contract?

Montseratt Mendez is working on a screenplay for us. I told him and Mac Rogers that Pandora Machine will be shooting a movie in March and it's all a matter of who gets me a screenplay first. And I told them they weren't the only ones writing screenplays...

I'm also using a program called Logmein to control my computers. It seems to work pretty well and it's free (for up to 5 computers).

Are you very bored? Do you like waaaaaaay too much information? I mean detailed data about the filmmaking business (with footnotes) and long essays on Wittgenstein? Do you? Well this is just a bit you'd get from reading the fascinating and sometimes complicatedly maddening Mr. Kronmeyer's blog:

"[Film studios tend to] adopt a small stable of transacting partners, perceived to be successful, or at least consistent. “Film distributors exhibit a strong tendency to contract repeatedly with the same sets of principals. They also allocate more resources to the films produced by those with whom they have had prior interactions – approving larger production budgets, marketing these films more heavily and scheduling them on more attractive release dates.” One might think such a course or pattern of dealings only could be based on shared economic success. The fact of the matter, though, is “these films actually perform worse at the box office. Distributors therefore would almost certainly benefit form allocating their resources more evenly across exchange partners,” Sorenson, O. & Waguespack, D., Social Structure and Exchange: Self-Confirming Dynamics in Hollywood 2 (Sep’t 7, 2005)."

That's a big argument for diversity, ain't it? I think Mitchell calls that "F your friends."

There's a whole label category called "Pictures of Drew" on this blog (this "marvelous blog" remember). Now I'm feeling I have to fulfill the label by having more pictures of the least-photogenic person I photograph. 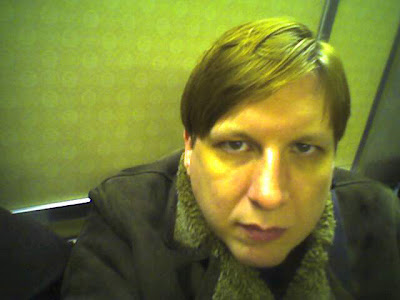 The color of the fluorescent lights on the subway is pretty spectacular. Camera phones struggle and put all the weight of decades of chip design into balancing skin tones, but the green still smashes through. Yes!

Email ThisBlogThis!Share to TwitterShare to FacebookShare to Pinterest
Labels: Moviemaking in General, Otherwise, Pictures of Drew