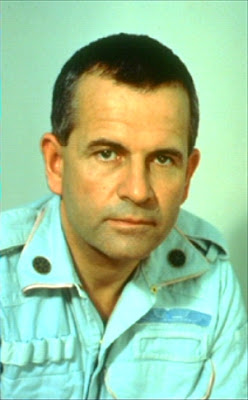 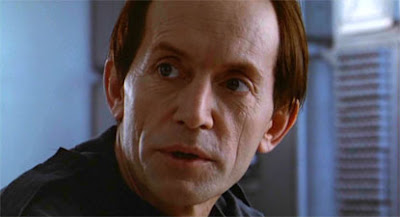 So I saw the wonderful show Too Much Light Makes the Baby Go Blind by the New York Neo-Futurists. They were doing their "best of 2007" show -- 30 plays in 60 minutes. Of of the plays was called Spoiler Alert which gave the spoilers to a bunch of movies and books with the refrain "and Rosebud was his sled."
The part which has driven audiences almost into open revolt is when the singer gives away the end of the last Harry Potter novel.
My problem was that amongst lines about how Bruce Willis' character was dead in The Sixth Sense and the surprise in The Crying Game, was the line "Bishop was an android".
Yes, Bishop was an android but he was the android in Aliens, not Alien. The android in Alien was Ash. The fact that Ash was an android and was helping the alien all along is a big 3rd act surprise in Alien (and if you I just ruined the movie for you and you're reading this blog there is nothing we can do to help you). The fact that Bishop was an android in the sequel Aliens is an early 2nd act reveal and a red herring - it's not a spoiler and you learn he's an android almost as soon as you meet him.
This is, of course, the sort of thing which drives me nuts. It activates some Asperger's part of my brain and sends it into high gear. It's like saying "There's a special providence in the fall of a sparrow" is from Macbeth.
I tried to use proper channels to see to it that the line was changed. Apparently, I'm the only one who cares.

I don't care if I'm right. I just want the Neo-Futurists to stop being wrong.

Looking on the bright side, there were 29 other plays that weren't wrong. That's pretty good for a $16 show.

Hello Andrew - you're not the only one who cares! My name is Joey Rizzolo. I am a Neo-Futurist, and I wrote the song in question, SPOILER ALERT!!! This post was just forwarded to me by someone in the Neo-Futurist network.

You are absolutely correct. I got my androids totally mixed up. I wish one of my fellow Neo-Futurists had seen the Alien canon a bit more recently than I and corrected me accordingly. Where were you when this play premiered in July?

We never claim to be right about anything; the best we can guarantee is honesty. But as I said, you aren't the only one who cares - this sort of thing really pisses me off. I'm going to change that line should I ever perform SPOILER ALERT!!! again.

Thanks for coming to the show!