It's been a long day -- and it started yesterday. Recording a concert and suddenly in prep for a fill-in on a feature. Maybe I should start at the beginning:

So my dufus friend Eve who has a masochistic desire to make everything harder than it outta be tricked me into saying "yes" when she asked if I could sub in for another sound mixer for a day on a movie she was producing -- calling me at 3:30pm for a 5am call the next morning.

This is how the day went:

9:02am
"Answer these questions in your head 1. if I had been an hour later for call, would the van have left without me; 2. have we got our first shot off yet?"

9:44am
"I wrote a text to my producer: 'Have you noticed that on our sets we never have closed rehearsals or anything like that? I guess that's why we get done on time.'"

10:01am
"Exterior shots. Feels like the temperature is going down even though it's later in the day. Interesting."

10:19am
"Hail. Huge monster hail. Well, we shot the wide, the reversal wide, and one person's closeup. We ain't getting the other actor's closeup."

10:27am
"Am warm and cozy inside now. Production, of course, is panicked."

11:07am
"We're actually doing nothing. Crew is playing on trampoline in back yard. We're lit. Camera's up. Talent is wired for sound. I have a weird profile picture of me. I'm mixing from the stairs in the kitchen. Somehow I intuited that the camera wouldn't be facing in this direction." 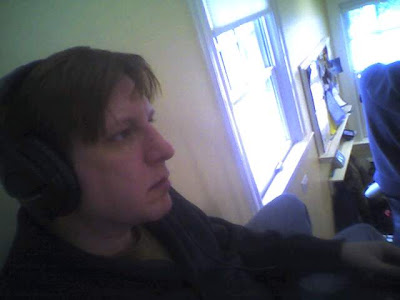 11:24am
"Snow is coming down mightily now outside. We won't be able to go back outside to finish that scene. If only we hadn't waited. We had a full crew at location at 6:30am. A friend of mine said 'So they brought a crew out to location in case they got any shooting done.' And somehow I'm the one with the rep for being sarcastic."

3:55pm
"Yes! There's a shot with no dialog (but where they want wild sound) in the (now) rain! Here's the excellent boom operator Seok Jun Lee and I huddling under our only umbrella. I have to get Seok to work on my next movie before he figures out he could be making money doing this. Wow, even camera doesn't look happy with their Arri 535 out in the rain." 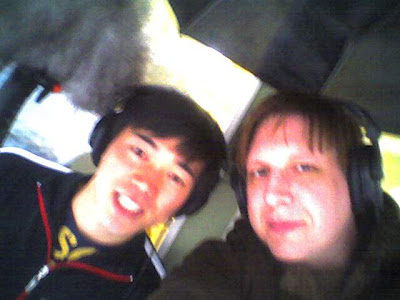 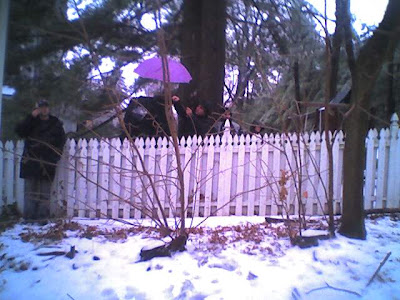 It still takes almost 2 hours to get home 'cause of the sleet and yukkitude.