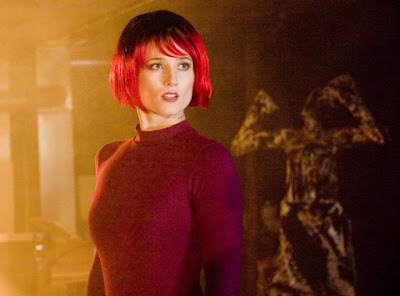 So we had our meeting with our distributor on Friday regarding Millennium Crisis. Oof -- the news for North American sales ain't good. The problem is that the title is really a "rental" - type title. And apparently Blockbuster (the largest N. American rental chain) made every indication up to, but obviously not including, an actual sales order that they were going to stock the picture. But then they didn't.
And that hurt distribution badly.
The picture was in brick-and-mortar stores at Best Buy. (It is still available online).  And it lasted on shelves for between 3 and 4 months. Best Buy ordered a thousand copies. They sold a little over 500 copies. I think it was 535 actually. I believe they pay 50% of the "retail price" with a "discount" of $.75. So if the picture had a "manufacturer's retail price" of $19.95 then they pay $9.975 per unit, minus seventy-five cents per unit, or $9.225 per unit. Times 535 units that's $4935.38.
That means our distributor grossed less than $5K in Best Buy sales. I know their total N. American sales (after returns) are about $11K so far.
Overall that puts the picture in the red in North America (the distributor paid us an advance, which I fear they regret having done now!)
We got a hundred sales from Netflix, plus sales at various other types of places. That $11K I mentioned earlier might become lower if there are a lot of returns.
Our N. American distributor is trying to make a package deal for a cable channel -- if they do, then Millennium Crisis might go into the black for them.
For us, the producers, we will be at "cash" break-even with Millennium Crisis just as soon as our German sale comes through. Actually, we'll be a couple thousand dollars in the black. The overseas sales saved us. That doesn't help our N. American distributor any, but it makes us feel a little bit better.
-------------
North American distributors have a lot of trouble with "indy" pictures in the Direct-to-DVD market. And it looks like it's going to stay that way for a while, perhaps permanently.
And here's why:
Blockbuster has almost completely stopped buying "indy" product. Basically, our old distributor, The Asylum, can still get their stuff in Blockbuster. But remember, they make a lot of "mockbusters" or "tie-in" pictures (something our sales rep has STRONGLY reccomended we do). Lion's Gate, the largest independent producer, can get their movies into Blockbuster too. Some Anchor Bay movies are being bought, but Anchor Bay is owned by Starz so they're basically just the distribution arm for Starz.
All this means that for all intents and purposes, direct-to-dvd in North America is all but dead.
And nobody knows how to make money with the Internet.
--------------------------
What's the good news?
1. Well, looking back at The Asylum's model, there are obviously opportunities with pictures which are able to "tie in" to a major studio's picture.
We'll be trying that. (We need to make a couple Terminator type movies. But on a spaceship.)
2. Also, there seem to be some opportunites with non-traditional TV sales. There are things like Fear Net and other channels specializing in HD - fare (which means they have to be shot and available in HD), and free "on demand". Ghost House produces for Fear Net (which is partly owned by Comcast). And The Asylum has produced for the Sci-Fi Channel (which we thought was dead for indy producers -- maybe it's coming back?)
So TV might just save us all. We shall see.
at 9/07/2008 02:46:00 PM

Email ThisBlogThis!Share to TwitterShare to FacebookShare to Pinterest
Labels: Millennium Crisis (was Bloodmask)