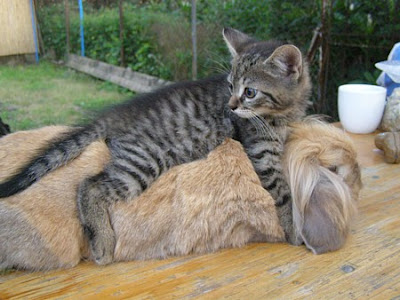 Now that we're out of day three, we move to my dad's shop (where I have shot at least part of every feature I've made except for Hamlet.) I did the better part of the load-in this morning and these are my thoughts.
We're wondering if this could be the creature. Using a pre-made mask has perils, like that it won't look quite this good or we might not be able to manipulate its mouth as we want to. But I do like the aesthetic an awful lot.
I'm trying to keep our actual shoot days to 8 hours (including lunch). Laura keeps advocating a 45-minute lunch rather than a 30-minute lunch and it only occurred to me yesterday why... it's so she and I can actually get a moment to sit down to eat!
So we've been going over 8 hours plus transportation to and from New York. From here on out though we should be staying well under 12 hours a day (NYC should only be 45 minutes if there's no traffic.)
Our script is in great shape. The structure keeps the whole thing moving like crazy so we don't need to worry about those long slow boring scenes in the middle of most independent movies. The handheld stuff is working well except that Panasonic put their eyepiece in the wrong place on their cameras. I wish I could put a new eyepiece on, then the camera would sit on my shoulder and I could look through the eyepiece. Instead we have to put the monitor off to one side... it's a little weird.
After this weekend we're going to start killing off characters wholesale. Because of the ensemble nature of the picture we had to start out with a gazillion* costumes on day 1, which is logistically very difficult. We also had to figure out which costume pieces the characters (who live) retain at the end. I hope somebody remembers when we shoot the scenes where the characters lose those costume pieces.
I'm really happy with our cast and crew. They're really working hard and they're focussed and it's making our days go easier. It's nice to see what actors do with lines and what they make of the movie. That, to me, is always a big facinating change from the script to the actors' performances. It'll be interesting to see what the editor does with the movie.
Jeff Plunkett looks like such a movie star it just disgusts me. Just look at him. After each take I tell him "OK, let's do it again, only this time less handsome." And he completely ignores my note, frequently doing the next take even better-looking than the time before.
I'll have to talk to his agent.
*That is an exact count.
at 9/11/2008 10:44:00 AM

8 hour shoot days, including lunch! I admire your sense of self-control.

I am starting to realize that I will shoot and shoot until somebody makes me stop. Or I run out of film. Roger Corman would be disappointed.

Also, I dig the creature mask -- very cool. I think if you light it right, it could work well.