There are partial spoilers about the recent Judge Dredd movie in this post.
This post is a list of random stuff which came out of my brain.
I'm glad we're all on the same page now.

Dredd is a surprisingly interesting film.
The slow-motion in it, which is beautiful, is also integral to the story. There's a drug which makes everything slow down. So the slow-motion is actually a part of the plot. Not a super-duper important part of the plot, but a part anyway.
There is no B story. And honestly you can feel it missing. There were a million different possibilities for the B story. In, like, the third scene Dredd is described as someone in control, but behind that is anger, and behind that is something else. We never went there. The villain had a potentially engaging story but we never went there either. And, of course, there's the inherent problem of the neo-Facist police state (which was addressed in the first movie but not in this one.)
The story isn't Dredd's. It's mutant psychic girl's. But her powers end up having relatively little effect on the story. 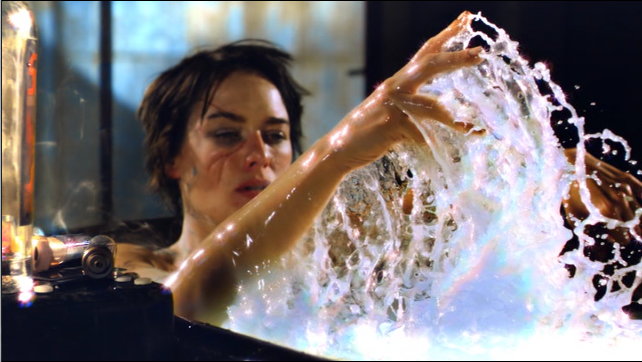 You finally get to see that Lannister get her comeuppance. Honestly she's such a good actor I couldn't recognize her but I was all like there's something familiar about her. So I looked her up on the imdb's and was all like oh, it's her.
I've seen so many movies lately, Jack Reacher or Zero Dark Thirty, which are shot un-artfully.  So it's kind of relief to see a movie where they actually care what the frame looks like.

I'm going to go out there and admit that I kind of like 2D blood. I like 3D CG blood even better (I don't mean a stereo visual effect because I hate 3D, I mean I like it when it was generated in a 3D animation program.)
I feel like Django Unchained used quite a bit of CG (but not 2D) blood. I say that because I'm under the impression that getting those long spurts of blood in a squib are very hard.
The color in this movie is just beautiful. It's mostly an amber-and-emerald movie.
I find it amusing that Brutalist architecture is such an easy signifier for Fascism. I want someone to make a 3D model of that AT&T switch across the street from my office so I can use that building in all my movies from now on.