Not my best day 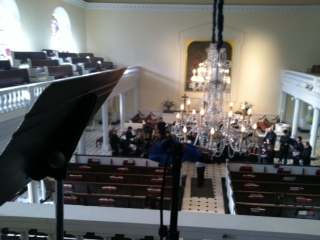 Obsessed with remembering the stereo bar for two microphones for recording the Russian Chamber Chorus of New York I completely forgot the actual mic clips. A priest gave me some blue painter's tape*. Yeah. I'm not proud. 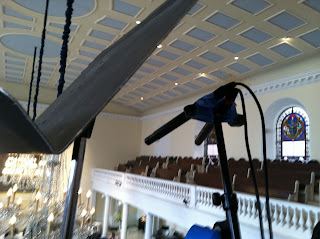 But then I had a more pernicious problem. Somebody kicked on the lights in the church and I got this obnoxious buzz in one of my AKG 460's. I thought maybe one of the capsules wasn't seated so I tried re-seating. That didn't work. I did notice, however, that my hand off to one side of the mic reduced the buzz considerably. Like my body was some sort of electromagnetic radiation shield for the microphone.
If I touched the mic capsule I could reduce the low-frequency portion of the noise. And I could get rid of some of the higher frequency noise stuff by putting my hand next to the mic. 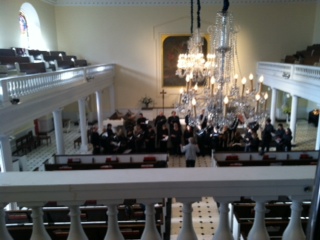 Of course, I couldn't stand there with my hand up next to the mic for the duration of the concert. So I ran down and got a music stand, thinking that perhaps a big metal shield would do the same thing my hand did. It didn't. And it sounded almost as bad as it looks.
Amusingly if I touched the stand to the mic element I could get rid of a tiny bit of noise. If the music stand touched the little neck-thing between the capsule and the body of the mic I got some AM radio. 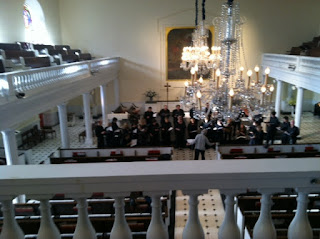 So none of that really worked.
By the time rehearsal was over I figured I'd swap the two mic elements just to confirm that it was the capsules and not the bodies of the microphones. Yep, the noise switched channels. But fiddling with the seating of the capsules a bit more and... the noise disappeared! Oh happy day.
Not for long.
Somebody dimmed the lights. Hoo boy.
So my EMI was back. Now, I quickly found I could shield a little of it (again) with my body. By this point the concert had started. The woman who came in late and sat in my aisle finally stopped rooting around in her purse for her keys. And there was no way I was going to be able to hold my hand up next to the microphone for the duration of the show.
So I did an ugly thing. As there was no intermission and not even any breaks between pieces, I just dropped the mic stand down to head-height right in the middle of the show. It sounds on playback (I just listened to it) like squirrels running up and down the microphone stand.
But with the mic stand down there by me I could shield it better. I had to breathe with my mouth open for the rest of the concert and every little tic and sound I made was louder than gunfire, but the noise was reduced.
Obviously on Wednesday I'm going to have another set of microphones as a spare...
*Sounds like the first line of a blues song.
at 1/22/2013 10:18:00 PM

Email ThisBlogThis!Share to TwitterShare to FacebookShare to Pinterest
Labels: RCCNY