If you want to see my notes on a screenplay you can't read then please, keep going. Otherwise nope. There's nothing to read in this post.
I thought way back in the day (meaning two days ago) that Barbara should be a ground operator for mechs. That makes it so she's like a team leader for the good robots. She has an implant on her skull which gets destroyed. It's goo enough to control an android if she replaces herself with it, but not to actually control a drone platoon. Does that even make sense? I thought that way she could be seen more easily in the Philadelphia Desert. (Comically, the "Philadelphia Desert" is an idea that Montserrat Mendez came up with on Earthkiller and I think we've used it in three movies so far.)
Barbara and Vicky seem more like sisters than friends. They get into a political spat so quickly -- friends wouldn't tend to do that but sisters would. Especially if they're on such opposite sides. Kind of like the story about the two brothers -- one who became a Green Beret and the other took asylum in Canada during the Vietnam War.
Are we going for the Supreme Leader also being an A.I.?
When the gang first meets up with Android Barbara I think it would be awesome if one of them really hated her and smacked her without warning. Smacks her. Kisses her. Smacks her again. I figure Alvarez for that part. She's jealous of both of 'em. Love triangle!
In the first scene -- what if Barbara hears an order to let some enemy robots go through to the city? She objects and Mission tells her to not pay any attention to the order she just heard.
Instead of calling it a Holocaster, how about just a "jack"? Or something like that? I think we'd get it, the audience would get it, and that's how people familiar with the technology would say it.
Maybe the kind of android she is isn't a combat-capable model? That would explain how they could have restrained her. 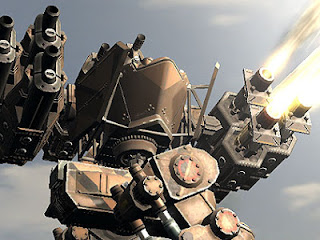 Scene 30 -- lets keep these locations in the same room. They have the jack right there.
32 -- I think Barbara has a one-room apartment like The Fifth Element. Somebody want to build that for us?
If the doctor makes house calls and a gang just shows up at her apartment it means a lot fewer sets we need to build. I figure he has a crew of techs. Or heck, they don't even use a doctor, it's just a bunch of low level medical plumbers (including Ryan) who show up, do the work right there, and leave. Not having a hospital means one fewer target for the robots to try to hit, know what I mean? Everything's mobile.
40 -- if we're going to do the whole thing in her apartment then it's possible she could have been in the shower when he comes in or something.
I feel like we're missing one bit of intrigue here. Barbara shouldn't trust Ryan. They should mistrust one another in every scene. I think they should start to get evidence that the Supreme Commander is another AI and that there's a whole