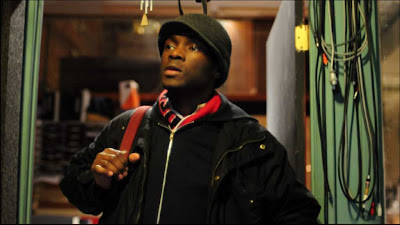 This is a capture from Blair's Nikon D-90 with my Nikon 35mm f1.4 lens. The amount of light is very very low here. This looks to me to be about a stop or so above what my eyes were seeing at the time.

************
Well, really annoying/depressing news on the Alien Uprising front: the U.S. distributor's lab Q.C. rejected the picture. Some of the items on the punch list I don't understand ("chroma lag on vertical bars") some of them are just stupid ("Reference Tones are set at +8dB" -- that's just stupid, it's digital -- the signal can't be more than 0dB. But video engineers are inherently stupid when it comes to audio so they just don't know that. Obviously they're looking at an analog meter). But yeah, now that I look at it on a scope there are some points where we slip below 7.5 IRE (I have trouble seeing how we go above 110 IRE anywhere, but I can't meter that anyway so maybe it did.)

How, all this time, have I missed Charlie the Unicorn?

So what's the status of AU? Will it make it to DVD?

Alien Uprising has been bought by a home video/VOD distributor (who is also our overseas sales rep). But we don't have a release date for it in North America yet.

It just got bought by a Japanese distributor. In our experience they usually buy less than six months before they release.

I'm keeping my fingers crossed that we get more sales after Cannes this year. Other than that I'll let everyone know once I get some actual facts! ;-)