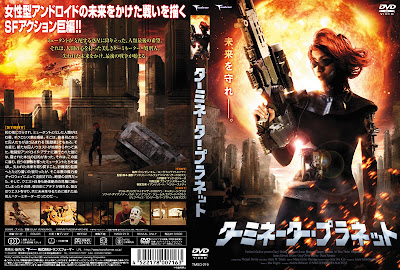 At the risk of pissing off our sales rep even more than I already have (which honestly I don't think is possible at this point) we're announcing the April 3rd release of Solar Vengeance in Japan. The movie is called "Terminator Planet" and of course the cover art by the Japanese distributor is spectacular.

Here is the press release (translated by Google into bad English).

We've been sitting on an older version of this artwork for a while now, just waiting for the distributor's site to go live with it. From what I can tell they've added lens flare and some sparks.
at 3/31/2009 09:26:00 PM

In my very limited experience, distributors are pretty easy to piss off.

And that DVD cover rawks.

This looks like a movie I'd want to get the Japanese DVD of, solely because of how nice that art is. Along with how JP DVDs are Region 2, and I don't believe this has been released in the UK.

The title is only officially available in Japan and (I think) Thailand. I'm not exactly sure how to buy a copy on-line from a Japanese retailer though. Oh, and they're fairly expensive from Japan too. Hmm... wish I could be of more help.