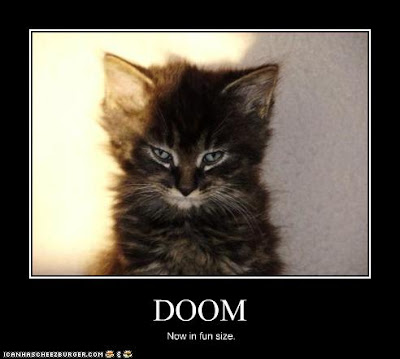 Second only to how much I hate standing in line at the Post Office is driving to Long Island (third place has something to do with airline security.) But today I drove out to pick up a set piece from Brian. Originally I was expecting it to be a flat which was about 5 foot by 8 foot but he went and built it 8 feet by 8 feet. I said to him "You know the camera aspect ratio is wider than it is taller right?"

So I was going to borrow a van to get it but an 8' square thing won't fit in a van so I made Brian slice the set piece into four sections (five if you count the door itself.)

We're officially halfway through the shooting of Clonehunter. Maduka is working on the digital cat. For someone who doesn't own a cat he's doing an excellent job. I only had one note about the tail -- that cat's tails tend to have minds of their own, at least the ends of them do.

Oh and I bet that our screenwriter Eric Steele is wondering "digital cat"? Yes, Naomi is a holographic projection of of a cat. There's no way we could have had an actual cat on set. It would have just gone to sleep under the cyro bay... ;-)