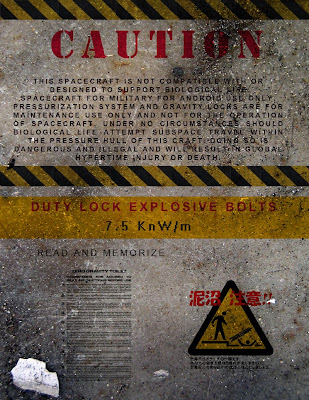 So I just figured out a technique for making signs and stuff which means I don't have to weather them with shoe polish. I can just grab a texture from a free site and overlay it in Photoshop. It's pretty elementary actually and I feel kinda dumb that I ain't thought of it before.

Actually, it doesn't always work as advertised. Sometimes I have to flatten and play with the levels to get it right when printing even if it looks good on the screen.

Other things I ain't thought of before, or at least hadn't resolved themselves in my brain.

I need to record some music. I want to record another album (as "Pleasure for the Empire") and I know I'm going to need music for at least the next two movies (probably three.)

I've been doing a little bit of guitar practicing since I got my Les Paul and since Ethan upgraded my custom guitar to a Blattocaster.

And I've been doodling around with a number of tunes in my spare time.

But I haven't actually written an album.

So then I read "Inside Out A Personal History of Pink Floyd". Nick Mason talks about how they would sort of work out songs as a band, starting with rehearsals. Of course! We need to doodle around in the studio!

Yikes! That's expensive! So we have to doodle in a focused manner. I figure it'll cost about $600 a day plus what it costs to pay a drummer. And I think we totally want the intro-with-mallets and song-with-sticks sound(s) on the drums.

So maybe two days of recording will get us enough material for an album and two movies? Maybe an actual rehearsal session should be thrown in there...