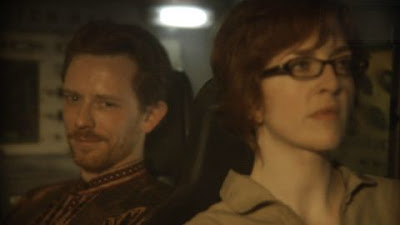 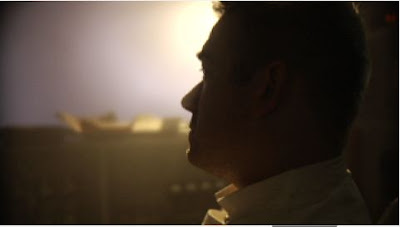 David Ian Lee as Raglan lurks in a dastardly manner behind Angela Funk as Rachel.

Ben Thomas gazing upon the world outside the bluescreen as Cain.

As it turns out our cameraman is a bit of a dope. He made two, maybe three big errors on day one. First of all, he didn't wipe the P2 card before we shot so the first reel of Clonehunter has a bunch of re-shoots from 0804 The Shriven. Duh. Then,
I the dopey cameraman didn't actually SAVE the new setting for the camera so the official settings for the Panasonic HVX200 are still:

But the big difference is that we now use the "User B" setting -- for incandescent light white balance. You'll notice you can see a lot more blue than in older movies. The Nikon lenses feel much different. Do the focus rings really go in the opposite direction as the Canons? There's a lot less that you have to turn them to focus, that's for sure. But they aren't nearly as resistant to flares as the Canon S.S.C's are.
at 5/03/2009 07:10:00 AM