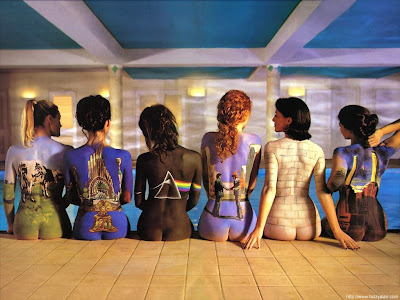 I just finished reading Nick Mason's Inside Out A Personal History of Pink Floyd. The book is fascinating if only because Mr. Mason's view of the amazing history of this seminal rock act is (admittedly) one which only the drummer, trained as an architect, could have. On occasion the details of the wattage of projectors is accompanied, a few paragraphs later, about "super groupies". Or perhaps it's the other way around.*

One thing that's clear is that they all worked very hard at what they were doing. Nick downplays any exciting drug use the band (with the exception of Syd) might have been involved with during the psycadelic era, but that sort of makes sense. It's hard to actually produce very much on 'shrooms and acid. Those are strictly consumption-level drugs.

There's a kind of tragic sadness in the story in that in many ways it's about a bunch of school friends who over 40 years had a big falling out. I suppose that's basically true of most all rock bands. At least two of them are still together and Nick seems to be on good terms with Roger, who does come off as a bit of a prick in the book, even though he presumably proof-read it (!). Now that band, which was begat around when I was born in 1965, has lost its keyboard player due to illness, and arguably two of it's leaders due to insanity (can you tell I've never been that big a Roger Waters fan?) still occasionally releases records and some of them are even good.

In the early 80's I saw pretty much all the rock movie midnight screenings at the Menlo Park movie theater with my friends Scott, Todd, and Ed. Looking back it seems somewhat funny because the three of us had and have fairly divergent taste. Todd was then more of a "classical snob" (and I mean that in only the most loving way) of the four of us, although his Beatles and The Who collections were nigh on complete. Ed was (and let's face it: "is") an Elton John fanatic. I think that Scott was really into ELP at the time.

I was particularly taken by The Beatles, The Who, and Jethro Tull (and Bach and Beethoven, never having much time for anything by Mozart other than the occasional requiem and a couple Queen of the Night arias). Which doesn't mean that some of the much wiser of my elders did not do their best to persuade me to change my old-rock lovin' ways. (In particular an incident when I was a sophomore and two seniors [including Peter Cenedella] took me into their room and played for me 1. The Residents, 2. The Dead Kennedys [I remember "California Ueber Alles"], and 3. some crazy new band that no other high-school kids knew about called Talking Heads.)**

I suppose that Pink Floyd Live at Pompeii was rather formative to my thinking of what a rock band could/should be. I spend a good many years with bands trying to make some kind of cohesive (and theatrical, but that would be the Jethro Tull influence) show.

I remember my guitar/composition teacher pointing out to me (this would have been sometime in 1982 perhaps?) that Nick Mason is one of the most controlled and disciplined drummers in rock or some such. I interpreted this to mean that every note, every drum hit means something. And boy does it. The control is really a driver of the music, the fills really turn you around into the next section (something which "machine gun" fills notoriously do not tend to do.) In a way he's the opposite of Keith Moon. Instead of the frantic energy of classic Who, 'Floyd goes for the big solid groove that allows for those glacial chord changes.

Ultimately Meddle is probably my favorite record -- if only because of Echos and One of These Days. I'm a big fan of Shine on You Crazy Diamond (which my crazy first roommate played all night long on the first night I spent in boarding school. Sheesh!) and Great Gig in the Sky. Basically my preference was for big and bigger Pink Floyd but not so much of The Wall variety (with the obvious exception of Comfortably Numb.)

Otherwise it seems like the inside of Pink Floyd was somewhat like what I experienced when I worked at the Wooster Group. Dysfunctional. Nick Mason comes off pretty well (after all, he wrote the book) but he even describes himself as being being un-confrontational to a fault. The petty cruelties the band inflicted one one another and on those around them seems to have made them pretty miserable.

*Technically this isn't true, I believe the references were in different chapters.

*But when I was a freshman a fellow named Doug Visthdom (sp?) played Sex Pistols, The Clash, and The Kinks for me.

Email ThisBlogThis!Share to TwitterShare to FacebookShare to Pinterest
Labels: music