Signals Of Fury: SRC Stall #14: Total Retribution (2011): If you've ever wondered how a group of filmmakers could so completely flush away a $1.5 million budget, wonder no more.

So yeah. There's this. A podcast which makes fun of indy films. Our man Tom Rowen joined in. "Soiled Restroom Cinema" takes apart Earthkiller, er, Total Retribution. Tom Skyped in. He is his natural and charming self. 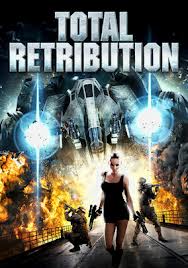 Estimated $1.5 million budget? Where on earth did that come from? Actually, I don't even know who submitted it to imdb. Tom technically shouldn't have told them the budget but even he estimated it at twice the actual budget. I suspect that in the middle of that exchange he suddenly remember "Oh yeah, the distributors hate talking about the actual budget."
Warning, this podcast is very mean to the actors.
The Pandora Machine logo does not help us.
Laos? Tom, we're not in Laos. You've been reading Dispatches.
Everyone knows that the terminal velocity of androids is 125 miles per hour.
They really don't like our Earthkiller space station CG.
Tom's justification of the way characters go from not-cursing to cursing is pretty much what the idea in the picture is. Which explains why and which characters cursed.
They actually criticize an actor for being too into their role.
The deal with the gun she throws away is very specific. Hmm... they really didn't understand the picture. I thought we spelled everything out pretty explicitly.
I do sort of get the impression that they are extraordinarily jealous of other people making movies. The idea that we made the movie in the first place seems to befuddle them.
Actually, their snotty comment about the "token black guy" who has a British accent "go figure" makes me say they're just assholes.
at 3/21/2013 05:55:00 PM

Dude, they're podcasters. "With edge". That pretty much says it right there. So why'd your actor guy even bother calling in to them?

He thought it would be fun. I dunno. Maybe it was fun?

I dunno. I didn't listen to it. There's enough podcasts that I WANNA listen to that I'm not going to waste time on ones I don't...

And what exactly is so insanely weird about a character having a mohawk? They do know that hairstyle has been around for just a wee bit of time, right? Like, you know, predating Herodotus?

It's not exactly the "Thinking Man's Podcast" now is it? ;-)