I have never been into superhero movies. I didn't like superhero comic books when I was little. I don't like comic books at all now. (I find them unreadable, I can never figure out who is hitting who in them.)
Costumed superheros are just... silly.
I mean you have to figure out a way around the costumed-ness.
I finally watched the Watchmen movie. I know. Too little too late. I'd... tried to read the comic book. I just couldn't. The movie, to me, was just a bunch of cool sequences about characters I was pretty much uninterested in. I mean, if maybe we could have tracked Rorschach's evolution and then had the fun and games section begin when he went to prison and then... whatever. It would have been... maybe? I don't know.
With trepidation I watched the Avengers movie. 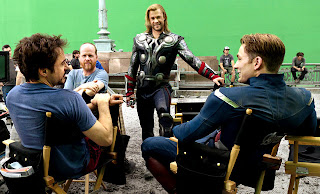 The Avengers is a completely different ball of rabbits. Lordy-lo the characters are better written. The whole thing is really good. I mean, with The Watchmen I get it. The logical conclusion of costumed superheroes. The logical conclusion of "superman" (Doctor Manhattan).
But the Avengers is actually an enjoyable movie.
Yeah I know that
It's hard to be me. Very, very hard. Hey! Look over there! [Scooches out of the room...]

I'm so glad someone agrees with me about Watchmen. I work with a lot of comic book geeks, so can't express my opinions around them. A movie about a bunch of dare I say psychopaths, who want to dress up as super heroes, apart from the one with superpowers who was really just a big blue jerk. I haven't been so glad that a movie ended since Wanted. Rorschach was the only interesting character and the only reason to rewatch.

BTW, I have an idea "Hamlet in Space", there you can have that one.

Yeah, even though Rorschach was a sociopath he was at least trying. Which, you know, makes him somewhat interesting.
Sigh. I do not make a good comic book geek. ;-)