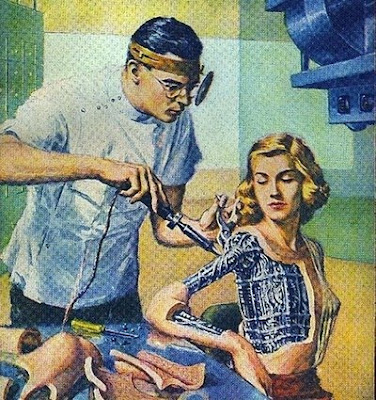 Ian Hubert interview. Filled with Blender-related things.
The American plan to invade Canada as part of its coming war with Britain -- drawn up and revised in... 1934. Because that's how we roll, apparently.

I've been playing a bunch of different guitar amplifiers lately -- Vox AC30 with top boost, some fancy-pants Yamahas -- and I've a bit of experience playing Marshalls and such, but you know what the nicest amp I've played recently has been? A Traynor amp.

I might be a lot more interested in chess if I'd only known we could make up our own rules.
Radial amp switcher. Actually, the active Radial amp switcher. I suspect I'm going to want to "Y" my Little Laneli and my Fender Twin. But I want to do it will little loss in as reasonable a way as possible. Maybe I should buffer down the line output from the Laneli? Maybe I should get a couple more Celestion Blue speakers. Boy, those are nice aren't they?

Voodoo Labs also makes an amp selector. But Lehle makes the sort of "gold standard" of combiner/switchers. Actually, if it's on all the time, here's the Lehle passive "Y".

The thing is, if I'm going to go through a Digitech Time Bender -- why don't I just use it as my splitter?

Of course, Mitchell just sent me an invitation to Google Wave. Now I have to play with that all day rather than working on the script I was to have finished by this weekend. At least I got lots of time snuggling the cat...
Please send this link to your aunt. You know the one. You know, and I know, that you know the one. Send it to her. Now.
at 11/28/2009 10:27:00 PM

The joy of Traynor amps, built with the uniquely Canadian sensibility that they should sound good even after they've been tossed off the roof. couldn't find the vid but there was a legendary bit on them doing that back in the 70s on a show called The New Music. Damned if the thing didn't still play. They used to be the poor man's Marshall but they're reputation for durability and quality sound has made them sought after in their own right.

This one, a dual 12", didn't feel "poor man" to me at all -- it seemed like a nice boutique amplifier. I'm a bit surprised they aren't used more as they're certainly a bit cheaper. I found that I wanted to set the gain very low -- to give it that old-school overdrive (so I'm sure it'll party like a modern hi-gain amp too, just by turning the gain way up) but I was quite impressed.