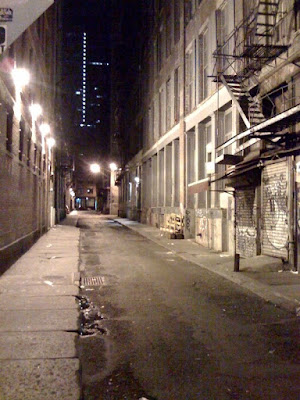 More about the theater I helped found ten years ago.

In November of 1999 I was looking for a theater for the winter concert that Prague Spring would perform in January of 2000. My high school friend Ed McNamee said "Hey, Andrew Frank is looking at a shoe store where he wants to put a theater, you want to go into New York tomorrow and see it?" I said sure and the next day the three of us were walking around the old Capezio store on MacDougal Street. Andrew turned to me and said "Would you rent this space as a theater?" I said yes, absolutley. And so a week later Andrew signed the lease.

How are things going now? I realized the other day that I am the only one of the founding members who has never "left" or taken a sabbatical from Theatresource. And I'm the only one who's there on a daily basis. So I've been involved in what's been going on for 10 years now and witness to the way it's changed (usually for the good) throughout the years.

But now the place is moribund. It's kind of amazing how in 12 months we could go from being one of the most interesting, artistic, and dynamic off-off-Broadway theaters to one that is completely stagnant.

The Board of Directors essentially meets in secret, there is a complete communications blackout from the Board to any of the volunteers, the bookkeeper dissembles and refuses to write numbers down (she prefers to not have a paper trail regarding the balance sheet (!) and there are actually no mainstage shows scheduled for January.

January? You realize it's the end of November, right? We didn't have that problem in November of 1999 -- the only reason January wasn't completely booked was that the lighting grid wasn't in the air yet.

Now, the communications blackout is likely due in part to the fact that I've been criticizing the malarky infused communications that had been coming. So of course the logical response is not to use less malarky, but to just stop communicating. Great.

Worse than all that, though, is that artistically the place is dead. Somebody thought it was a great idea to do The Crucible at Theatresource. Yeah, that's a great idea. We so desperately need another version of that play. Here's a simple rule you can use in life: When the Wooster Group has done their version of a play, it's time to put it away. Forever.

It's obviously time for a picture of a mouse or kitteh or something. So: http://cuteoverload.files.wordpress.com/2009/11/p1030271-crop.jpg

I don't believe that I know you, but I do know Ed McNamee from Metuchen HS class of 82. Ed was a very good friend of mine in HS. Any chance you know of his whereabouts or his contact info? My name is Robert Peppard, and to the best of my knowledge he does not live in Metuchen any more. Any assistance would be greatly appreciated. You can reach me at peppardr@yahoo.com