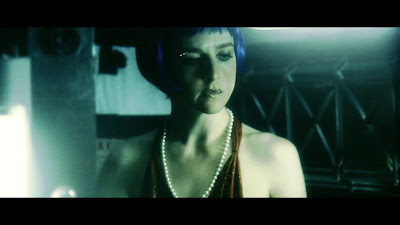 I'm having a kind of Angela Funk fetish-y day.

On Clonehunter: we're trying to complete all the effects which aren't flythroughs of the city as soon as possible. Just completed act 6 in that regard.

Apparently the effects order in Final Cut Pro is from top to bottom. I read that in a comment on a YouTube video so it must be true.

Some people are so nuts they put anamorphic adapters on the Panasonic GH1. I have no idea how those things fit.

The Magnum Edit Detector is freakin' awesome. Shamefully I'll admit I didn't pay anything to download it. And they only ask for $20. I'll pay later today. It works great. When you want to bring in a piece of footage in an After Effects composition, but need it split up scene-by-scene, this is the script to run. I couldn't even practice guitar it went so fast (that's my excuse for not practicing though).

Oh look, I just did a pass on act 2 -- all effects are in, sans the city flybys. And act 1 is done (sans city flythroughs, there was one missing cat but I took the footage from the previous cat shot, we'll see if Maduka discovers I did that and yells at me.) And now act 3 is done.

My favorite compositing tool in After Effects is the ability to bring the exposure up in the preview window. You can really see what you're doing with that thing.

OK, act 4 done (w/o city flythroughs). I'm starting act 5 but there's a hugenormous bluescreen section right at the top and I don't want to deal with it right now. So there!