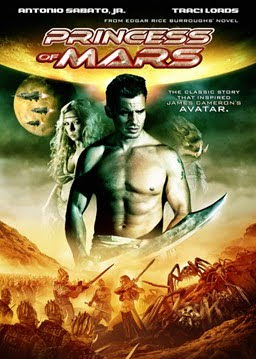 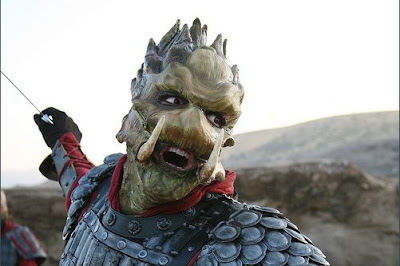 OK, so I'm totally envious of The Asylum getting this picture out. I want a Princess of Mars screenplay!

I'm not saying that it's not a little frightening to not hear any of the dialog (see post below for their teaser trailer) but the red martians actually look pretty good. Sure, they look nothing like the book, but those martians would be a major league pain-in-the-neck to deal with.

I actually heard a story today about an independent film where the producer actually told the cast to take down any pictures they had of shooting the movie from their Facebook pages and the like. The producer was trying to limit the publicity. For an art-house film.

You've got to be kidding me.

I think I'm going to make everyone sign a Disclosure Agreement, not an NDA. You have to post pictures and stories about the production on your Facebook page. Or you will get a spanking. Unless you're into that. And then you won't.

That Princess trailer looks pretty good. But it seems they kind of jumped the gun. I know they're cashing in on Avatar, but what are they going to do when Pixar puts out their big-budget Princess adaptation? Oh, maybe that's when we get the Asylum Princess "special edition DVD?"

When is the Pixar version coming out? Ours should come out then. Yeah!

Not sure about the Pixar version, but Wikipedia states it's due in 2012. Also, I think you should call your version John Carter: Warlord of Mars in homage to the old Marvel Comics series. Except that title might be copyrighted? Public domain stuff is so confusing...

I think titles aren't copyrightable. And 'sides, I wanna do PRINCESS of Mars! ;-)

Asylum generally makes their movies for a budget somewhere in the neighborhood of $500K. That's probably less than one half of one percent of what Disney is spending to make their version.

If this movie is one tenth as entertaining as the Disney version, that will be enough for me.

Really? Half a million sounds a bit high. I know back in the day they were doing 35mm features for an average of about $80K. Someone there told me he used to budget $15K for camera and film -- that was it! This picture looks more expensive but I'd think it would be in the $200K range. At least that's what the effects look like to me. I suppose it all depends on how much Traci Lords costs these days.

You're right, it looks like it could be entertaining. I have a bad feeling we just saw all of the visual effects work. The riding-beasts (I forget what those are called) actually look pretty good to me.

Heh. Looks like your right. The budget for Transmorphers was reportedly $300K and I had thought they'd bumped that up for recent titles, but apparently not.

The potential lack of visual effects doesn't worry me too much. Half the fun of a movie like this (for guys like me anyway) is seeing how they compensate for the low budget.

Mostly, though, I'm impressed with the decision to make this movie now and latch onto the Avatar connection. They can then double up and latch onto Disney's version when it comes out. That's what the military types call a force multiplier right there.

I'm looking forward to it too!