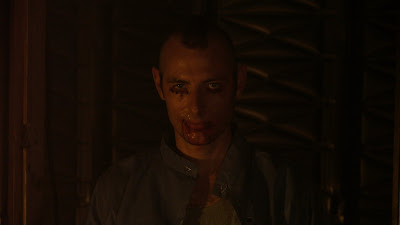 Walter "Barney" Barns as Trig. He actually got a mohawk for this movie! I kind of like the whole Clockwork Orange meets Zombieland look for him.

Joe Beuerlein as Milton takes some shots at Trig.

Joe and Libby's sets are fantastic to work on . We were able to do so many things -- like go up into the freakin' ceiling! I knew when Mozz wrote that the android had to go up into the ceiling there was just no freakin' was that was possible. But we did it. 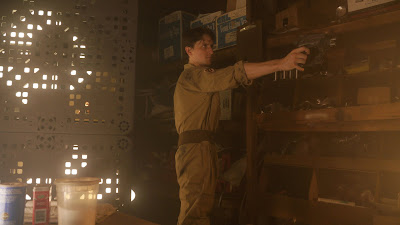 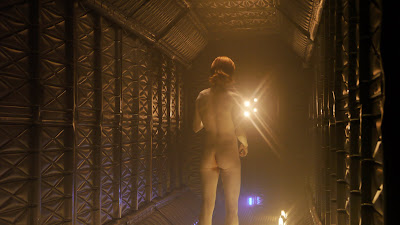 We're going slower on Earthkiller than we have on previous pictures. There's a couple reasons for that. One is that having an actual art department means that we have actual sets to build and move around. We're able to shoot in 360 degrees, and that's certainly a first for us.
The other is that the full-body makeup on the lead android simply takes a while to put on. We did chop an hour off the day in makeup-putting-on by the second day of shooting however.
The real problem right now is that we can't leave sets standing because my dad's graciously lent his shop space for us to shoot in on weekends and they, shockingly, need to do actual work there during the week.
at 7/26/2010 10:07:00 AM

Your movies keep getting better and better. These sets are on a whole different level then any of the previous films. It's really awesome. I can't wait to get on set and see them in person.

Thanks guys! It's all 'cause of Joe and Libby.