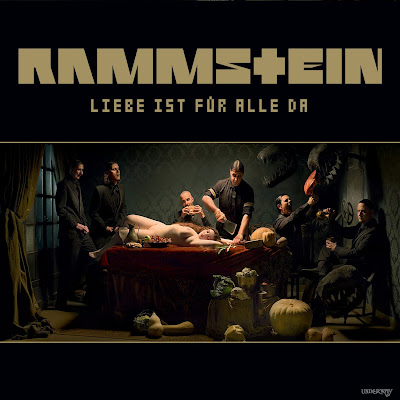 Does Rammstein really have to try to be controversial? I mean for them, a black cover with white text "Liebe is Fuer Alle Da" would be scary enough. Sheesh.

Stu Maschwitz: "Who would have imagined that audiences don’t want movies to feel more like plays?" Ha! That's his rebuttal about 3D.
Overall, I gotta agree with Mr. Maschwitz in that people do tend to get all caught up in their tools and not actually making feature films.

I saw Legion this week on DVD. Man, that movie got hammered in the reviews but it's not such a bad picture. Sure, there's the issue of the opening act being too long (because it's a "double open", first with Michael's fall, and then the intro of all the mortals) and on my TV at least there were a bunch of parts where it was just too dark. But the real trouble is (and this is from someone who's directed a Paradise Lost -inspired feature, so learn from me you youngins) the backstory. Because it's not in the Bible and nobody reads Milton anymore, the whole notion of the War in Heaven is lost. Michael and Gabriel were in this fight once before -- against Lucifer and the Third of Angels with him. Theologically, Legion holds up. Most reviewers couldn't see that.
Sigh. It's hard to explain the ways of God to Man...

Speaking of going 'gainst the gods, I saw the new Clash of the Titans. Another double-open (c'mon guys, get better at avoiding these -- keep watching The Terminator to figure out how to weave multiple story lines without trouble). Funniest thing I've heard anyone say about the picture is the three word review "Man Bites God."

Saw 10 minutes of Legion. It's bad.
Saw all of Clash of the Titans. Will never get that time back.

But the fuckin' Pegasus looked AMAZING. I'll give them that.

Yeah, they nailed that Pegasus. Even on video it held up amazingly well.