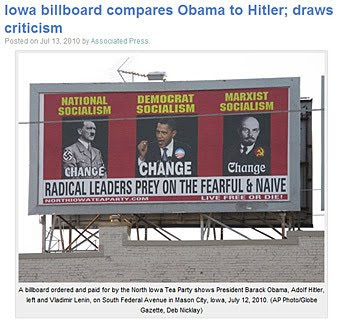 As John Rogers points out, how is it that what Republicans were thinking in 1972 is now socialist fascist Marxism?

Funny thing is, most people who scream "Fascist" at, say, health-care-reform, have no trouble with actual fascism like this crazytime racist and ignorant ad.

Why should we care if a mosque is built near ground zero (it isn't, incidentally, a mosque, nor is it at ground zero, but those facts aren't terribly important now are they)? Seriously, would we be complaining if someone were to build a church near the Oklahoma City Federal Building? Right, exactly.