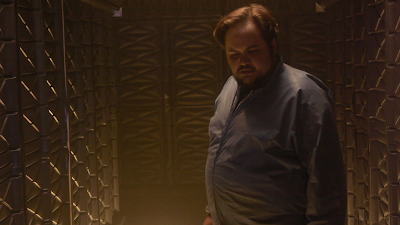 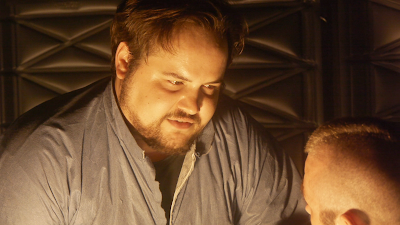 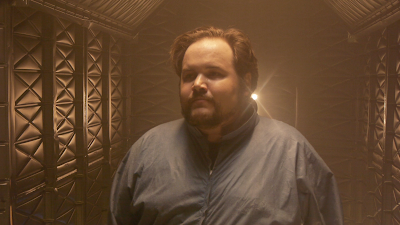 Brian is terrific. He has this whole Orson Welles vibe going down. And, like most everyone else in the story, he doesn't live very long.

I noticed that we're making an amber movie. I guess that's due to my tendency to use florescent lights (and not well-balanced fluorescent lights at that). And this picture was a clear contender for lots of haze.

The makeup department is doing a great job of making everyone look sweaty. It's so freakin' hot on the stage that everyone is drenched in sweat.

Joe and Libby's sets are a-freakin'-mazing. We can actually shoot 360 along a horizontal axis and a vertical one. We can (and have) pulled out a side wall so we can put the camera there -- you know, just like real movies do!

And I found last week's dialog. Someone (probably me, but I don't remember) did something irresponsible but not entirely stupid with the CF card. It got dropped into our main (banana) case, which we used for camera and sound. But it ended up stuck inside a plastic bag filled with wind covers for lavaliere microphones. So you couldn't see the CF card inside by just casually looking at it. And besides, the bag looked closed. Anyway, it's found and that's one less stressful thing from my life.
at 7/27/2010 10:05:00 AM