I've done a lot of whining and complaining about Netflix here on this blog. Netflix has been a disaster for independent film. Back in the day, Blockbuster was heaven-sent. Our first picture, Pandora Machine, got something like 4700 orders from Blockbuster at $7.25 a piece. And that was a small order from the big "B". 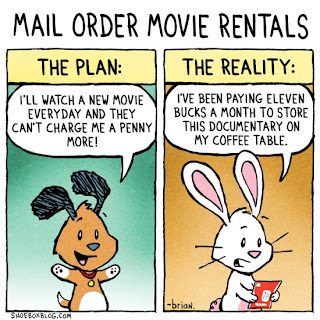 Our distributor at the time was The Asylum. They took a big chunk of the $34K order. And, stupidly, at the time we had a sales rep whose territory included North America (and they didn't really know what they were doing with North America). So they took some money. Still, we ended up with about $17,000 when all was said and done with the Hollywood Video rentals and such.
And that movie sucked had one good scene.
Nowadays a Blockbuster sale is hard to come by (and it'll typically be a revenue-sharing deal). Blockbuster stores are closing by the thousands and Blockbuster restructures under Chapter 11.
So indy filmmakers think "Well then maybe Netflix will buy my movie?"
Netflix hates indy movies the way Blockbuster used to love them. They expect so many people (x) to queue an indy picture (y) before they will even order the movie from the distributor/producer. And frequently they won't tell you what x is for your movie. This is so they'll agree to order like maybe a couple hundred copies of your DVD at three bucks a piece.

Even The Asylum is complaining about Netflix.

The thing is that for the indy world, the Netflix model just doesn't work. Say you have a movie with some awesome cover art and it's sitting on a shelf at Blockbuster, a movie the customer has never heard of, but it has an awesome title like (say) Fear of Clowns. And it has a really freaky looking clown on the cover ready to butcher dozens of innocents in the suburbs. If you're into horror pictures and you think "Hey, there hasn't been a good clown horror picture since Killer Clowns from Outer Space" you're GOING to pick up the movie.

What you won't do is scroll through thousands of titles on a computer and pick the cover of the movie you want to watch on a Saturday night with some beer, a pizza, and a couple friends. So Netflix just doesn't make sense for indy titles.
at 11/27/2010 04:55:00 PM

I hope they go out of business. But not before I finish streaming season 1 of the original Battlestar Galactica. Damn, that Athena was HOT! (totally forgot...)

And I hope they take Redbox with them when they go out of business.

And then we go back to the world of $99 VHS tapes!

I'm really torn on Netflix. As a movie watcher, I think they provide a great service for a fair price. As a movie maker... well, my last Netflix deal barely made enough money to cover the cost of the DigiBeta master.

Speaking of Netflix... Hide and Creep has nearly 12,000 user ratings on Netflix, many of them positive. It would sure be nice if I could let all those folks know about Interplanetary when it comes out in March. I wonder if there is a way to do that.