I Ain't Buyin' It

Someone on the Internet was wrong today and I just have to fix it.

Overthinking it has the Female Character Flowchart. Now I'm gonna make an ad hominem remark. I bet the author don't do nuthin' in the dramatic arts. This chart is based, in part, on this essay which (in a nutshell) asks for "weak" female characters (meaning: characters who are flawed, not "weak".) I buy that. Perfect characters aren't terribly interesting dramatically.

So getting back to what's wrong with this chart: it has Ripley from Alien in it.

And you don't go messin' with Alien on my watch. 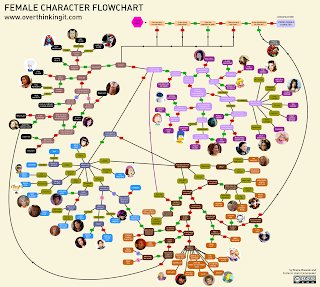 Now here's an interesting thing about the year 1977 and the Ripley character. She was originally written to be a man. You can tell that Lambert's character is a "female" character from the time as she's kind of useless and specifically 'cause she won't stop screaming and get the hell out of the way when the alien shows up at the end and Yaphet Kotto has a flame thrower and could have just killed the damn thing.

Oh wait. Suddenly I don't care. Because in that "weak" character essay (linked above), Ripley is explicitly characterized as a strong (meaning flawed) female character. So... I don't care about the logical inconsistencies anymore. Sorry to have bothered you. Carry on.

Maybe I care about Amazon Studios. Oh wait. No, I really don't. I'll upload a movie, see if they want to send me a million dollars.