How many people are in space right now?
What's the difference between buying a Dell XPS from Dell or from Amazon?
Where are 25 pictures of cats and dogs photobombing one another?

Eergh. My Dell dual-core XPS is dying. When I first bought that machine everyone told me "Oh man, don't get a Dell, their prices are too high." But when I explained what they were selling me and the price it was, everyone shut up.

And that dual-core was nice. It's served us for nigh on 5 years as the main audio computer. Solid, able to handle a lot of effects, and fast. And it was better for audio than my more recent quad-core Gateway cheapo computer (by far).* But eventually all things come to an end and I think my Dell is destined to be lent or donated somewhere.

There are 170 billion galaxies in the observable universe. Galaxies even exist inside of voids. 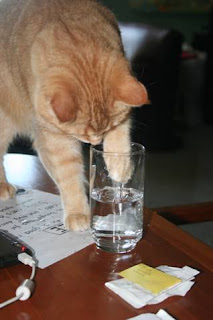 I use a great audio program called Samplitude. Somehow I've managed to lose my installation disk for version 11. And although I have the dongle/hardware key, I still need them to send me the software on a disk. But they're getting right on that.

My sister caught Meydl being a royal little pill. Cat.

Email ThisBlogThis!Share to TwitterShare to FacebookShare to Pinterest
Labels: Meydl