You Need My Notes 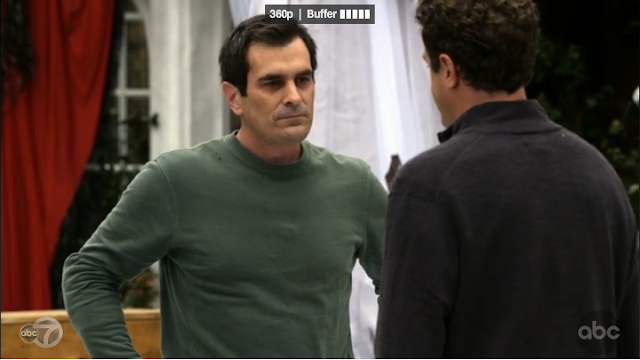 So I'm watching Modern Family on Hulu (because apparently I'm not going to be touching any scripts or mixing or doing anything useful this weekend) and the first thing that struck me is that the show is not "lit funny". There's this old idea in TV (and it maybe came from movies) that comedies have to be over-bright and everything lit evenly without shadows. Well this show has so many shadows it would make Titian blush.
And I'm sure I'm only one of several thousand people in the world who notice this sort of thing but isn't that a taped-up mic rig right in the center of his chest? Yep, you gotta be a techno dork to care about that. Of course, that kind of costume is somewhere on the order of simply impossible to body-mic. You could try weaving a Countryman lav into the ribbing of the collar but the sound would be pretty crappity because you'd be mic'ing under his chin. So yup, right under the clavicle it goes.
And you know, there's a chance that his shirt actually just folded and creased like that. But my guess is microphone.
Of course, he actually does a 360 where the back of his shirt comes up (immediately after this part of the shot, but in the same setup) and I dunno where they'd have put the transmitter pack. Maybe in a front pocket?
I always hated wiring people up. Clothing noise on lavs is just a bitch. Especially on men wearing tight shirts. Or women with dangly jewelry. Or squeaky leather jackets. Or skirtchy shirts. All of it.
at 11/27/2010 11:11:00 PM

I've noticed body mics on that show, too. Bet they didn't have to worry about that as much in the pre-HD days. Not that 360p is HD...

Yeah, I don't think it's so much an HD vs SD issue as it is just really difficult to put body mics on some costumes. And I bet they specify that everyone has to be body-mic'ed and sent to an iso track. A show like that you'd think it would be easier to have two boom operators. But if it's multi-camera (I don't know) who knows how wide camera "C" is...