It's My Blog So I'll Ramble If I Want To

High on generic Ambien and top-shelf booze I got some things to say about politics in America.


Firstwise, the Left in America. There is no real left. You Europeans have actual socialists in your parliaments. We have, like, one (his name is Bernie.) Other than him, no socialists.
If you're saying that Obama is a socialist that's because you don't know what a socialist is. I've spent a lot of time in my life thinking about what socialism is and what capitalism is. Is Social Security socialism? "No!" screams all but the most dedicated to the Ayn Rand cult because you'll never get re-elected. But of course it is. It was invented by Communists, for cryin-out-loud. Is that bad? No. It's a good, working, system.

But that's not what my drug-addled state wants to say. No, rather, don't overthink the Republican victory in the House as a "tsunami". Look, Republicans taking the House in the mid-term elections were a given after the super-majorities the Democrats got in '08. Every rational person knew this.

And right now the Democrats still control the Senate and the Presidency. And this President is smarter than you are. How do I know? It's because he's smarter than I am. And there ain't too many politicians who are. "Smart" here is defined as "the ability to predict future events from present circumstances." 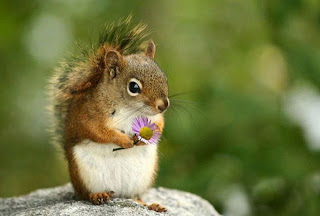 Remember the mid-term elections after Clinton became President. Newt Gingrich ruled the Republicans with an iron fist and drove a stake into the Clinton administration with Ken Starr as the engine of the Clinton implosion? Oh wait, remember how all that went? As my dad pointed out there was a sex scandal and the opposing party's leader (Gingrich) had to resign while the President was handily re-elected.

The one thing which Obama has consistently rocked at is staying focused on the future. Not so much interested in putting out fires on a day-to-day basis, his administration has distinguished itself in looking at the long run -- whether that's getting the nomination, getting the election, or getting comprehensive health-care passed.

I'm outraged! Not because of your political views. Because you posted the same squirrel earlier this week.

Do you see kids, what drugs will do to you?