I haven't been getting any work done. In fact, time has slowed (or sped up) so much I'm surprised it's Saturday. 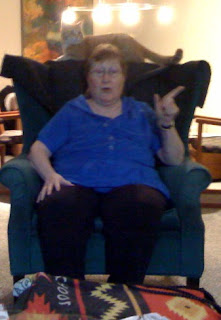 I've taken some pictures of cats. Meydl and Iona (who only just today learned that my name, "Andrew", was the name of one of the disciples). 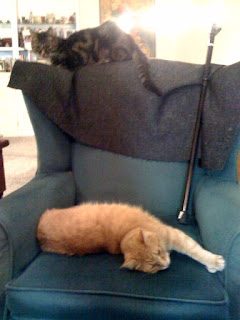 Here's Pushkin and Meydl. Yep. Taking pictures of cats. That's about as useful as I've been. 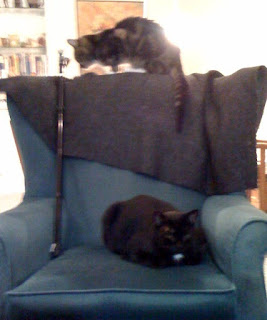 And hey, I thought about getting some exercise. That's almost just like getting exercise. My doctor will be delighted. Here is Pushkin again atop his chair, with Winston in the seat.
In other cat news: Winston had to go to the vet today to get an antifungal bath. I slept through the adventure my parents went through to get him into a carrier, to the vet's, and into the bath. But when I woke up this morning I thought "Did a cat poop in my bed?"
I mean it smelled terrible. Winnie's bath was apparently in sulphur. Which being that he, a black "basement cat" might find comforting in its hellish way, was pretty vile and loathsome to the rest of us. Even the other two cats seemed worried.
Apparently the poor fellow has a bout of ringworm (which isn't a worm -- it's just a fungus). I said "Couldn't they have just dipped him in tea tree oil?" But our guess is that because a cat is going to lick himself clean, whatever they bathe him in has to be non-toxic to cats.
But whew, did that ever stink up a storm.
Just as horrible as he smelled though, the smell went away in a few hours. Iona figured it was because Winnie slept the day on top of a pile of my dad's sweaters. Hopefully my dad won't realize that.
at 11/27/2010 07:00:00 PM