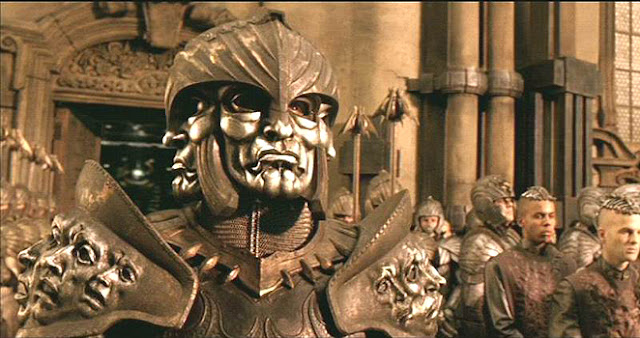 I was kind of disappointed in the relatively low success the Chronicles of Riddick had. I thought the picture was exceptionally well written. One thing about it, upon re-watching it, man -- it's dark.

I wonder how much Warhammer 40K influenced Chronicles? Dune is a clear influence on both works.

But man, that movie does not let up. No robots show up and say funny things. There's no soldiers cracking wise under pressure. And although I don't mind that, I suspect that grimdark does bad things to profitability in a movie -- especially a big-budget wide release.

Yeah, I liked it and Pitch Black also. Been a fan of Twohy's for a long time. You see Perfect Getaway?

I recommend it. Don't read about it, just rent it if you haven't seen it.

Speaking of Twohy, Below is like the best haunted submarine movie ever.

Below is simply brilliant. I love every single thing about that movie.