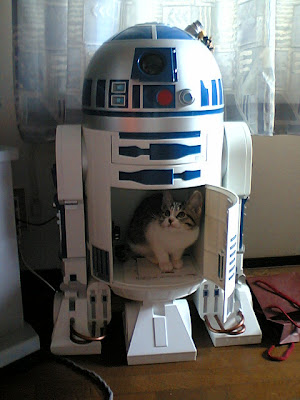 I don't know if I'm actually eligible for the Netflix Find Your Voice Film Competition. They say something about not having made a "publicly screened" feature, which I supposed I haven't. I've had North American home video distribution, but not theatrical distribution.

They want a screenplay and a budget sent in with their application. Well, I have neither. But the application isn't due until February 9, and I have the book How to Write a Screenplay in 21 Days. That's all I need, right?

I'm working on a script though. It's another "forgetful android" picture inspired by Battle Angel Alita.*

The other question is whether we'd convince them we could actually make the picture for $150K. Of course we could, that's more than the combined budgets of all our previous pictures. But they'd take some convincing.

I just had some NyQuil because I have the stupid flu that everyone has right now. I am high as a freaking kite. Higher than that kangaroo.

*I hate writing. I'm much better at re-writing. Y'know, editing. But to do that I can't be the last person to have touched it. So if I write something I need to kick it to someone else to do the first re-write/edit and then back to me to re-re-write/edit. I don't know who I'll kick this movie to. Everybody's busy.
at 1/10/2009 09:12:00 PM

Email ThisBlogThis!Share to TwitterShare to FacebookShare to Pinterest
Labels: 0901, Moviemaking in General