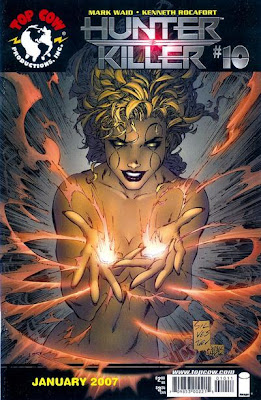 Hunter Killer vs Cyberforce sounds like an excellent idea for a picture if the story is good. Maybe I'll have to pick up the comic. I bet that somebody has it in development.
I think this clip below has good music for a shootout. They go for very light percussion during the gunfire and instead do quick descending flute lines (could be synth, could be real flutes, dunno). Speaking of which, I want good free Mellotron flutes.

A manager for deleteing/creating/saving Final Cut Pro preference files -- Digital Rebellion's Preference Manager. They also make an app called Compressor Repair.
You realize that I only know this because FCP crashed during the night. Oddly, it only took out one render from Compressor as it did so. It seems to have partially re-launched FCP and is working on the next render. Interesting. We'll see what happens.
Google has an offline version of their webmail in "labs". We'll see how that is as a backup for Gmail.
We have just under 130000 frames in the movie. We're rendering RS422 at about 80 frames a minute. That gives us a little more than a day to render out this one version. I bet the DVCPro HD would have been faster if it hadn't crashed. Phoo...*

Alaska: The Satchel Boy from John August on Vimeo.

I am so over Digital Rebellions, Digital Revolutions, and Digital Whatevers.

I am going to start an Analog Rebellion.

Yeah, don't you just love it that you need a digital rebellion just to get the dang thing to work?

Oh, the Penelope is such a tease.

Though I hear there's an Australian shop that converts old 35mm cameras (MovieCams, maybe?) to 2-perf.

Yeah, I heard of 'em too. Now all I need is about 100 rolls and free processing and I'm ready to go!

Actually, stock and processing is the cheap part -- the telecine is where it gets pricey!

I still want to build my own film scanner. A local genius and I have discussed it and even done some tests. I think it is do-able, if we could find the right digital camera to use as the "brain".

Next time you shoot film, check out cinelicious.tv -- I hear good things about them. They're in Hollywood, and their HD prices are pretty awesome.