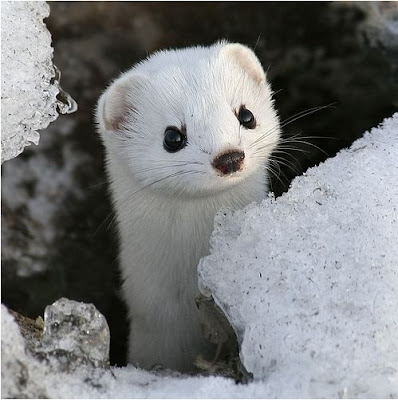 There are three desks in the small edit suite Pandora Machine is in. Three of us pay rent -- Blair, Mitchell, and me. For the last year or so I've been sharing my desk with Maduka. We have three computers on that desk. He's been cutting picture and doing visual effects, I've been doing audio and whatever else it is that I do. Frequently we spread out and start taking over Blair's desk. When Blair shows up we run and scurry to get out of his way.
Mitchell, however, just hasn't been around at all. Apparently he has two children and a house on Long Island. So eventually I'm going to have to take over his part of the rent. He told me that he liked the idea of having an office in Manhattan and that I could just set up my computer on his desk and he'd keep paying rent. This is pretty much "win win" except that I get both of the wins. I'm not exactly sure how this could go better for me...
I tell Maduka that we no longer have to sit on top of one another in order to work:
Me: "So I'm going to move my desk over to where Mitch's station was, but he's going to continue paying rent."
Maduka: "You know, when a man starts paying your rent in this town, there are certain... expectations..."
Me: "Well, Mitchell's pretty cute. I think I can handle it."
Maduka: "Which of you is older?"
Me: "I am."
Maduka: "Oh really? That's a first. It's usually the other way around."

*************
As I'm cleaning up I find two bottles of whiskey. One is a full bottle of 12-year-old single-malt scotch, and the other is a bottle of a "Product of Scotland" with just a shot or so left in it.
Me: "You know, we should really just finish this bottle of whiskey."
Maduka: "Most conversations which start like that end badly."

Mitchell does a funny thing with his lower lip when you make out with him. He said Austin Pendleton taught it to him. It drove me nuts. But if it means you get his desk free, I'd put up with it.

OH! Don't laugh. It hurts his feelings and he clamps up tighter than a crack whore with a yeast infection.

I always thought that was the whole point.