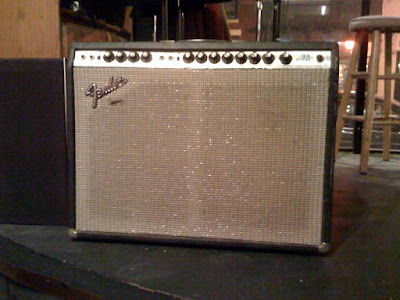 I only have one regret in life. That is that I didn't realize almost 30 years ago that the sort of player I am is "Les Paul guitar with a Marshall amplifier", not a "Stratocaster player with a Fender Twin Reverb amplifier".

That's been rectified now, of course, and I can't say I'd be anywhere different now if I'd known that back then. Indeed, my indy cred would probably have been even lower in the 80's with a Les Paul.*

I've been carrying around this Fender Twin Reverb amplifier for 27 years. I've never actually been that happy with it. I suppose it was nice to have a real, professional, amp when I was a teenager, but it weighs almost 70 pounds and never had the sound I really wanted.

Now I've done some extensive listening tests with it and its "Fender" speaker, against the Fender Twin emulator in my Peavey Vyper with the Celestion Alnico Blue speaker, using my custom "Blattocaster" guitar.

The Fender Twin has subjectively a bit more of the guitar's "wood" tone but it's also objectively more band-limited in range (it sounds more like an AM radio). There may be some more very low end on the Fender (which I attribute to the cabinet being larger, but I don't know, it could have been the acoustic coupling of the table it was on).

Subjectively (and most importantly) the Peavey sounds "smoother" thoughout the range of the instrument, it doesn't have the "peaks" and "barks" of the Fender. I can imagine that in some limited circumstances one might want those "spanky" kinds of tones, but they're very difficult to control and nominally less-than-musical to my ear. The Fender, however, set the standard for how things should sound for a long long time. I just don't like it for me.

So I'm selling my Fender Twin Reverb. It's a late 70's model (I got it used in the Summer of '80 I think) The reverb and the tremelo no longer work. There is no footswitch. The on/off light is burned out. It has one "Fender" speaker and one Peavey speaker in it. Only the Fender speaker is hooked up right now. It's noisy and the pots are dirty. It works. There's a sticker of a duck on it. There is no line out. There is a push-pull "overdrive" knob in the master section.

*Them indy bands just love their single-coil pickups in their solid-body guitars. I actually did play with humbuckers but in a hollow-body Hagstrom guitar for most of my teens. Then I had a bunch of really crappity guitars and a couple sorta OK ones 'till my late 20's.
at 1/16/2009 10:04:00 PM