RCCNY on PHC at TH 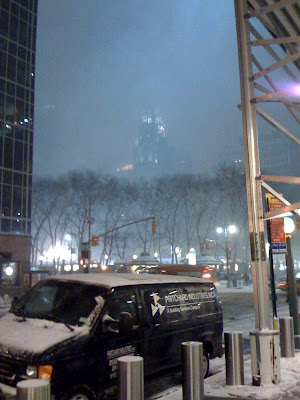 I saw the live performance of A Prairie Home Companion tonight at Town Hall in New York. I'd never been to Town Hall before. I'd never seen the live show of PHC before. It was fascinating.

The thing is, of course, that the live show is really for the radio. So the sound in the auditorium is actually pretty quiet. And "dead" (meaning not "live" acoustically). It's a show about what's on the radio, after all, not what's happening live.

The guests were the Russian Chamber Chorus of New York -- which is a 25-person group, and Nora Jones (who came with a band), as well as Madeleine Peyroux (who also had a band) and their regular band. That means there were two trap kits on stage, at least four keyboards, and something like 8 bass players (but I can't be sure). Boy, there was not a lot of room on that stage. And then they added the chorus. Good times!

It's probably a bit disconcerting for many of the acts to be as quiet as they were. I imagine the stage monitors were fairly low too. Now these were acts which aren't typically super-loud rock bands (heh, like Tyrannosaurus Mouse) but still I can imagine it was a bit off-putting. But that's just the way it's gotta be for the broadcast to sound any good.

Nora Jones seemed very uncomfortable playing guitar. She seemed vastly more relaxed behind a piano. RCCNY simply nailed their performance. The director, Nikolai Kachanov, is quite simply a genius.
*********
After the performance. Snowfall in December. Looking south on 6th Avenue toward Bryant Park.
at 12/19/2009 10:41:00 PM