Trailer lives up to the teaser. 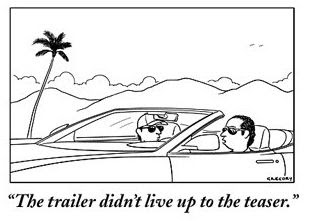 Here's an interesting post about a royalty statement from an "unrecouped" band on Warner Brothers records. I had a friend who was with a band on CBS and I'll tell you -- he really felt like he "owed" CBS 3/4 of a million dollars. He was very happy when he was let go of his contract.

One of the things I'm less-than-good at is keeping on top of the "creatives" who work for/with me, making sure that stuff gets done when it needs to. I guess I feel like I'm paying people little, or not enough, and I can't really harass them. The problem is that we have very finite deadlines and sometimes things go badly because people are late. And by "badly" it means "I have to do it."

Here's some more news: "Lady Action" is dead as a Japanese genre. They don't care anymore. There's so much product out there that there's a glut.

Word on the street has Netflix paying on the order of $2400 for 18 months of their video-on-demand for "indy" movies. I believe that is not exclusive and you can still sell DVD's and such but I don't know what that does for TV rights.

Here are some media/blogs we need to send press releases to: